I bought a couple of the Sapphire cards from last year, which is not something I do frequently. 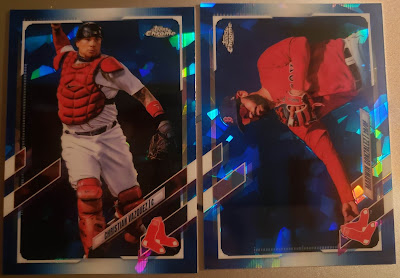 1.  Christian Vazquez.  I had to grab Vazquez as he was one of my favorite players, up until he was traded to the Astros at the trading deadline.  That deal really upset me.  Vazquez had been one of my favorites for the last several years and it took me by surprise that they would trade him away.  I am hoping for a reunion, but not expecting one.

2.  Marwin Gonzalez.  I know he was terrible in Boston, but there were not a lot of cards of him.  I like to get cards of players that are kind of rare.  This card is also one that did not have a regular version in Chrome.  So that was another reason to get it.

Posted by Metallattorney at 10:36 PM