I wish I had a scanner that still works.  I feel bad because a lot of these cards deserve to be seen a little bit better than this picture.  Anyway, I tried out another Ebay break for Stadium Club Chrome. 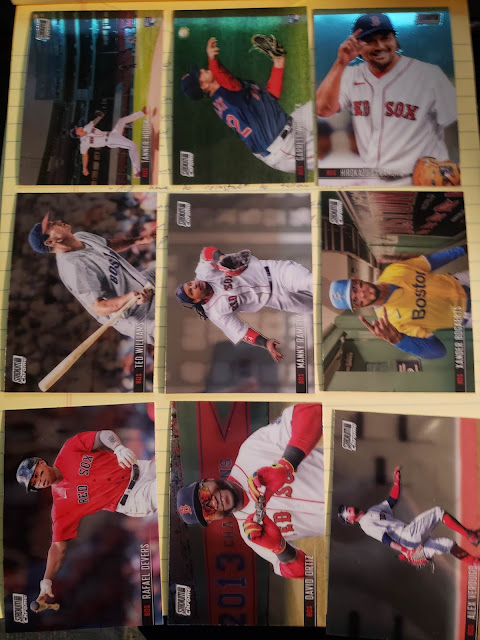 1.  Tanner Houck.  This is my favorite photo and a big reason I wish I had a better scanner.  Love the full shot at Fenway Park.  Houck was the team's first round pick in 2017.  He should have a more settled role next season, quite possibly out of the bullpen.

2.  Garrett Whitlock.  Whitlock was Boston's best rookie in 2021 and an absolute steal in the Rule 5 Draft.  From the Yankees no less.  Whitlock will likely be a started in 2023.

3.  Hirokazu Sawamura.  Sawamura was a reliable righty from Japan in 2021.  He had some decent moments in 2022, but was eventually released in a purge of relievers who were ineffective.  Somehow, Ryan Brasier still had a job.

4.  Ted Williams.  I always enjoy it when The Splendid Splinter makes an appearance.  Easily the franchise's top player of all time.

5.  Manny Ramirez.  I love this shot too.  Manny is still waiting on his call to the Hall, but it may be a long time given his PED ties.

6.  Xander Bogaerts.  I still love these uniforms.  Bogaerts is Boston's biggest free agent this offseason and will hopefully be brought back.

7.  Rafael Devers.  Probably Boston's biggest star of the moment, the Red Sox need to lock him up too.

8.  David Ortiz.  Ortiz is Boston's most recent Hall of Famer and is one of just a couple of players who have played for four Red Sox World Championship teams. 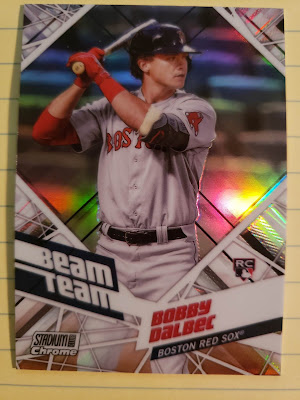 10.  Bobby Dalbec.  My only insert from the break is this Dalbec card.  It was recently revealed Dalbec is on the trade block.  I have been saying that for awhile.

Posted by Metallattorney at 8:24 PM