Topps Now cards have been much easier for me to come by than anything else recently.  Which kind of sucks in a way.  But that's just how it has been with my isolation over the last couple years.  Here are some more, all of which are from August 26, 2021, which must have been a slow day for other teams.

On August 26, 2021, the Red Sox beat the Minnesota Twins 12-2.  There were several standout performances. 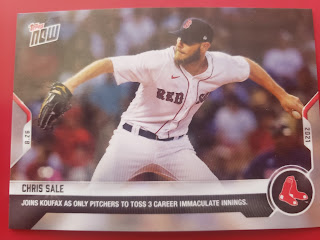 Chris Sale made the start in his continued return from Tommy John surgery, something I predicted he would eventually need years ago, even before coming to Boston.  Sale pitched just over five innings, giving up two earned runs, two walks, and striking out eight.  But in the third inning, he pitched his third career immaculate inning, striking out all three batters faced on nine straight strikes. 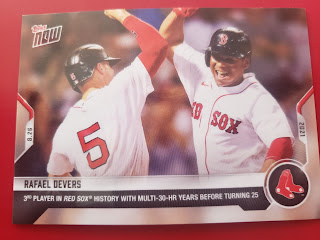 Rafael Devers became just the third player in franchise history to have multiple 30 home run seasons before turning 25.  The others?  Some guys named Ted Williams and Nomar Garciaparra.  Pretty good company.  Devers was 2-5 on the night with three RBIs.  He also stole a base. 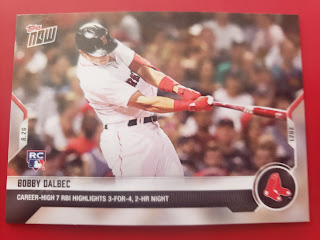 Rookie Bobby Dalbec was the big star of the night though.  All Dalbec did was collect three hits in four at-bats and drive in seven of the team's runs.  Five of those RBIs were collected on his two home runs that night.  It was a big night for the rookie power hitter.

Posted by Metallattorney at 8:24 PM