I did another of those group breaks on Ebay for Topps Update.  There were a lot of players I was excited about in the set.

Here is the break: 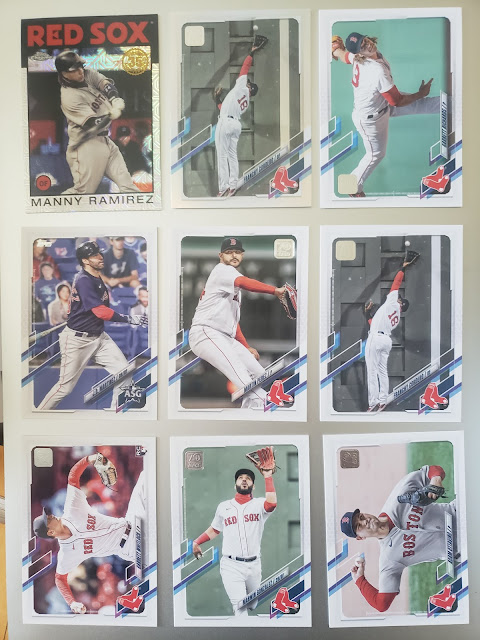 1.  Manny Ramirez.  This is one of the Silver Pack cards from jumbo boxes.  Ramirez is one of the few massive free agent contracts that actually worked throughout the life of the contract.  He ended up spending just under eight seasons with Boston and hit .312/.411/.588 with 274 home runs and 868 RBIs.  He was an All Star every season and won six Silver Sluggers, as well as being named the World Series MVP in 2004.  He was absolutely worth the money.

2.  Franchy Cordero.  Cordero was the only player with Major League experience acquired in the Andrew Benintenti deal.  He struggled greatly in 2021, but was starting to play pretty well at the beginning of this season.  He has been slumping recently.  This is a Rainbow Foil parallel.

3.  Garrett Richards.  Richards pitched in a variety of roles in 2021, starting in the rotation and then pitching out of the bullpen.  He even notched a few saves.  At times he was virtually unhittable, but had difficulty remaining consistent.

4.  J.D. Martinez.  This is an All Star insert.  Martinez was one of five Red Sox All Stars, including Nathan Eovaldi, Matt Barnes, Rafael Devers and Xander Bogaerts.

5.  Martin Perez.  Perez was an All Star this year with the Rangers.  I do not think anyone expected that after he was 10-13 with a 4.65 ERA for Boston the last two seasons.  He notably had a complete meltdown in the ALCS against the Astros.

6.  Franchy Cordero.  This is the base card.

9.  Adam Ottavino.  Ottavino was essentially acquired for nothing.  Boston agreed to take on his contract from the Yankees and also got a decent reliever prospect.  Ottavino went 7-3 with a 4.21 ERA and saved eleven games, second on the team.  He struck out 71 and walked 35 in 62 innings pitched. 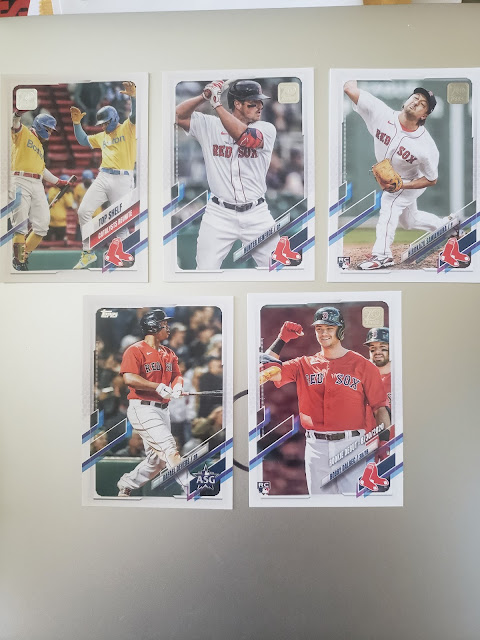 10.  Alex Verdugo/Enrique Hernandez.  Verdugo and Hernandez were teammates with the Dodgers for a few seasons before Verdugo was traded to Boston.  After a season away from each other, Hernandez came over to Boston to be reunited with his old teammate.  I like this shot because of the City Connect jerseys.

12.  Hirokazu Sawamura.  Sawamura came over from Japan prior to the season.  The sinkerball specialist turned in a nice season overall.  He had a record of 5-1 with a 3.06 ERA.  He struck out 61 and walked 32 in 53 innings pitched.

14.  Bobby Dalbec.  Dalbec had a nice rookie season and was great in the second half.  He hit 25 home runs and drove in 78 runs.

Posted by Metallattorney at 10:50 PM