Technically I covered Ferriss in a previous post, but he shared the post with Tex Hughson.  And plus, I get to show off this card in this post: 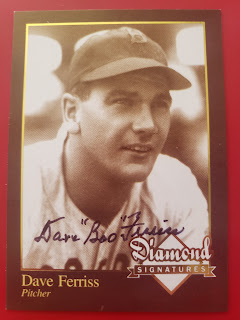 This is a Diamond Signatures autographed card of Ferriss, released in 2006.  This set had a number of autographed cards of players from the 1940's.  I may have to grab a couple more, particularly the Mel Parnell.

Ferriss was signed as an amateur free agent by the Red Sox prior to the 1942 season.  He spent that year in the minors and showed some promise.  He spent the next two seasons in military service then made it to the big leagues in 1945.  That year he turned in one of the best rookie seasons by a Red Sox pitcher ever.  Ferriss was an All Star and finished fourth in the MVP race after compiling a record of 21-10 with a 2.96 ERA in 264.2 innings pitched.

Ferriss pitched in five games the next two seasons.  He pitched in the Red Sox minor league system until 1952.  He never made it back to the Majors and retired at the age of 30.  Ferriss did not pitch long, but he was a big part of the rotation in the mid 1940's.  He was one of the team's top pitchers in 1946.

Posted by Metallattorney at 11:56 PM