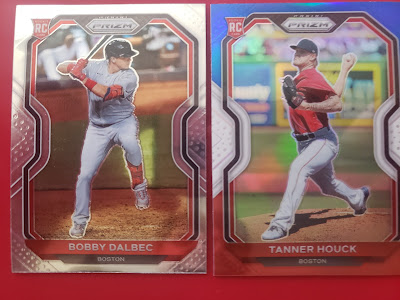 Well, at some point I decided to try out another blaster box of Prizm and pulled cards of the two big Red Sox rookies going into the 2021 season.

Up first is a base card of Bobby Dalbec.  Dalbec strikes out a ton, but when he makes contact, it's loud.  He hit 25 home runs as a rookie, and he even hit one in one of the games I saw in person last year.  His 2022 season has been mostly forgettable though and I suspect he's going to fall into the category of guys like Will Middlebrooks and Michael Chavis.  Guys who put up big power numbers right away, but Boston held onto them too long rather than trading at a time when their market was big.

Next is Tanner Houck.  This is a retail-only parallel.  Houck has seemingly settled in this year as the Red Sox closer.  Last year, he was more of an all-purposes pitcher, starting and relieving.  He started 13 games and also notched a save.  Houck is a former first round draft pick.

Posted by Metallattorney at 11:13 PM