Boston took on Tampa Bay at Boston, winning the game 2-1.  It was a low-scoring game, which Hunter Renfroe provided all of the offense.  Boston was trailing 1-0 going into the bottom of the 8th inning after a strong pitching performance by Nathan Eovaldi.  The bullpen gave up the sole run in the top of the inning.  Renfroe came on with Kyle Schwarber on base and homered, giving the Red Sox the lead, and eventually, the win. 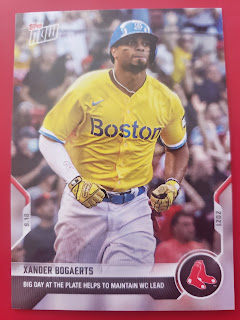 The Red Sox blew out the Orioles on September 18 9-3.  Xander Bogaerts provided most of the offense, collecting three hits in five at-bats.  He scored two runs and drove in four on two singles and a home run.  Tanner Houck took the win.  Boston notably wore their City Connect jerseys which garnered a bit of a cult status among fans which continues to this day.

Posted by Metallattorney at 9:49 PM