The last win of the 2021 season for the Red Sox came in Game 3 of the ALCS when Boston beat the Astros 9-2.  At the time, they took a 2-1 lead in the Series.  But it was all downhill from there. 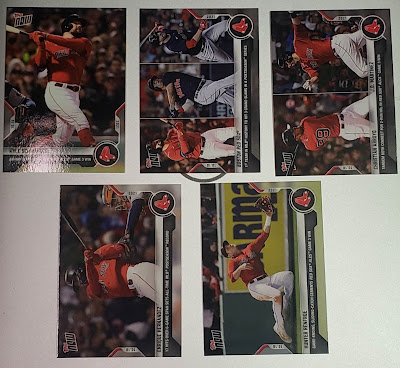 1.  Kyle Schwarber.  Schwarber hit a grand slam in the third inning off of Jose Urquidy.  That was pretty much all the Red Sox needed.

2.  Kyle Schwarber/Rafael Devers/J.D. Martinez.  Boston became the first team in postseason history to have three grand slams in one series.  Each of the players depicted connected for a bases-loaded bomb.

4.  Enrique Hernandez.  Hernadez had two more hits in the game, giving him 17 in a six-game span.

5.  Hunter Renfroe.  Renfroe made a sliding catch to put the game away for the Red Sox

Posted by Metallattorney at 9:25 PM