Last Christmastime, I picked up a couple loose rack packs of Panini Mozaic and blasters of Archives and the holiday Topps brand.  Here are the breaks: 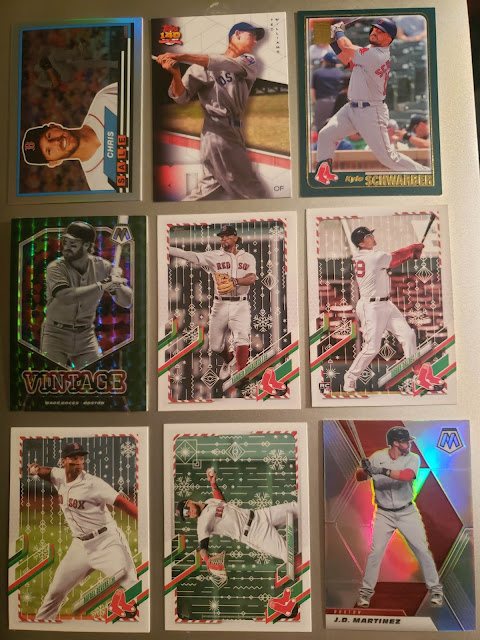 1.  Chris Sale.  This is the Topps Big Foil card of Sale.  Unfortunately, the last couple years have been injury-plagued for the ace southpaw.  That has certainly not helped much.  Hopefully he will be back at full strength next season, or at least stay on the mound for the most par.

2.  Ted Williams.  I always enjoy when The Splendid Splinter makes an appearance, and it helps that this is not a picture that I have seen a million times before.

3.  Kyle Schwarber.  Man, I wish Boston would have re-signed him after the season.  He led the National League in home runs this year for the Phillies.  It would have been nice to have that kind of power in Boston this year.  He made an impact in his short stint in Boston.

4.  Wade Boggs.  This was the best card from the breaks.  An insert that was also a foil parallel of The Chicken Man.  Boggs, as I have said many times, was my first favorite player.  The first couple years of my collection, he was the player I picked up the most.

5.  Xander Bogaerts.  I am hoping that Boston will lock Bogaerts up.  This has been a frustrating offseason thus far, waiting for positive news on that front.

6.  Bobby Dalbec.  I really wanted Dalbec to succeed this year, but he took a big step backwards from last season.  There were times he looked utterly lost at the plate, and he struggled in the field as well.  I am not sure we will see him in Boston in 2023.

7.  Rafael Devers.  Devers is another player I want to see locked up for the long term this offseason.  Unlike Bogaerts, he is not a free agent, but he will be after 2023.

8.  Alex Verdugo.  Verdugo is my pick for the player most likely to have a breakout in 2023.  He has a lot of talent, but just has not quite harnessed it yet.

9.  J.D. Martinez.  After Jose Abreu signed with Houston, I would not be surprised to see Martinez re-sign with Boston for a lesser dollar amount.  He has been one of the most successful free agent signings in team history.  In his five seasons in Boston, he hit .292/.363/.526 with 130 home runs and 423 RBIs.  He was an All Star four times and won two Silver Sluggers (both in the same season).

Posted by Metallattorney at 11:22 PM