In this series, I will look at each player who played in 1981, the year I was born. Because, why not? 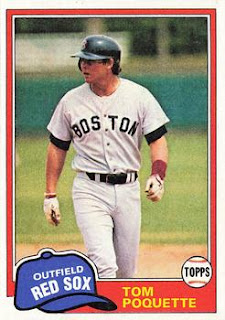 Tom Poquette was primarily a fourth outfielder throughout his career, splitting time between the corner spots with the occasional stint in center as well.  Poquette came up through the Royals system and had a couple of decent seasons early on in his career.  In his first full season, Poquette hit .302/.361/.430 with 18 doubles, ten triples and two home runs.  The next season he hit .292/.337/.412, but that was the last season he played in more than 100 games.
Poquette was traded to the Red Sox in June of 1979 for George "Boomer" Scott, who was nearing the end of his career.  Poquette was terrific in his first season in Boston, playing in 63 games, primarily in center field, and hitting .331/.365/.429 with nine doubles, two home runs and 23 RBIs.  Unfortunately, he was injured and missed the entire 1980 season.
That brings us to 1981.  Poquette played sparingly for the Red Sox, making it into just three games as a defensive replacement and had just two at-bats.  He did not have a hit.  In June, Poquette was placed on waivers and claimed by the Rangers.  He played in 30 games with Texas, but hit just .156.  He returned to Kansas City the next season, but still did not play well and his career as a player was over.
Poquette's contributions to the 1981 Red Sox team were basically non-existent.  He had a nice 1979 season with them though.
Posted by Metallattorney at 10:54 AM

Email ThisBlogThis!Share to TwitterShare to FacebookShare to Pinterest
Labels: 1981