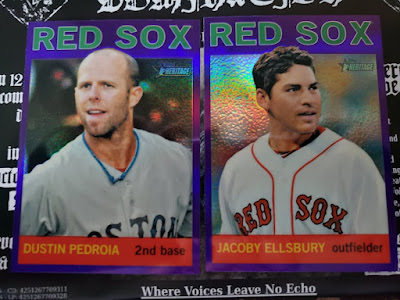 The next package is a pair of Topps Heritage Chrome Purple Refractors.  Dustin Pedroia and Jacoby Ellsbury came up around the same time period, with Pedroia making his debut late in the 2006 season and Ellsbury late in the 2007 season.  They were both big parts of the 2007 and 2013 World Championship teams.

Pedroia will be remembered for spending his entire career with the Red Sox.  He will be a borderline Hall of Famer, with late career injuries being the only thing that could potentially keep him out.  Pedroia won the Rookie of the Year and the MVP in consecutive seasons, and was a four-time All Star, winning four Gold Glove Awards and a Silver Slugger.  He could have done more had he not been injured, but he was a terrific player who made the most of his abilities.

Ellsbury was known for his speed.  He broke the team's single-season stolen base record by swiping 70 bases in 2009.  He led the league in stolen bases three times.  He had a massive 2011 season which marked his only All Star appearance as well as his only Gold Glove and Silver Slugger Awards.  That season, he became the Red Sox first 30/30 man and finished second in the MVP vote.  Unfortunately, Ellsbury will not be remembered quite as fondly as Pedroia because he jumped over to the Yankees the first time he was a free agent.  His career also ended prematurely due to injuries.

Posted by Metallattorney at 8:30 PM