I keep getting too busy to post here.  I am WAY behind.  Let's do some Topps Now cards, shall we? 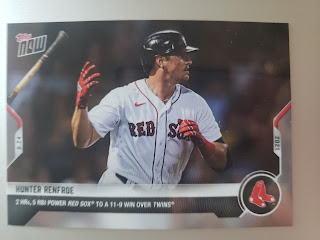 Hunter Renfroe took over as my All-Time One-Year Right Fielder after a terrific 2021 season in which he hit .259/.315/.501 with 31 home runs and 96 RBIs.  He led the league in assists, but also errors.  Renfroe had a great game on August 24, clubbing two home runs and driving in five runs in a win over the Twins. 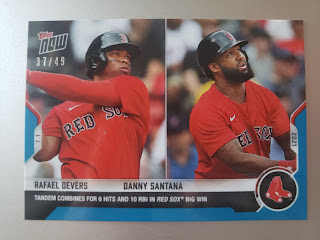 I picked up a parallel of this card, primarily because I thought this would be Danny Santana's only card with the Red Sox.  It did not end up that way, which I will get to eventually, though no idea when.  Santana did not do much for the Red Sox, but he provided some valuable pinch-running appearances, including in the final game of the ALDS.  Oh yeah, Rafael Devers is on this card too, but there are plenty of Devers cards out there. 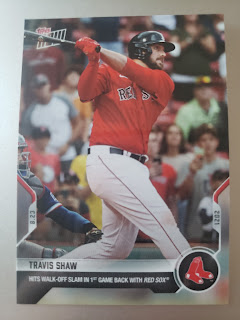 How about a walk-off grand slam?  Recently re-acquired first-baseman Travis Shaw did just that on August 23, leading to an 8-4 victory over the Rangers.  Shaw came up with the Red Sox and spent the first two seasons of his career with Boston, before being traded to the Brewers, for whom he had some very good seasons.  He was plucked off of waivers by the Red Sox to provide some pop primarily as a pinch hitter, and also to spell Bobby Dalbec on occasion.  This was his first game back with Boston and his biggest moment in his tenure with the Red Sox.

Posted by Metallattorney at 8:55 PM