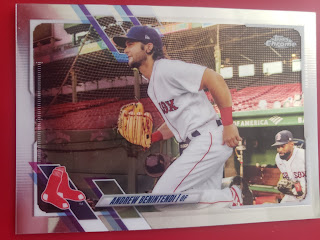 Nothing terribly exciting from this break.  I am pretty sure it was a blaster box.  I pulled just the one base card.  And that base card was Andrew Benintendi, who was traded away just prior to the 2021 season.  I really cannot say that Benintendi was a bust.  The seventh overall pick from the 2015 Draft was great for the first three years of his career, finishing second in the Rookie of the Year vote in 2017.  Then, mysteriously, he declined dramatically.  For his Boston career, he hit .273/.353/.435 with 51 home runs, 119 doubles, 279 runs scored, 260 RBIs and 53 stolen bases.  Decent numbers, but given his decline the last two years, mildly disappointing.

Benintendi was traded to the Royals for Franchy Cordero, Josh Winckowski and three other minor leaguers.  He has since improved somewhat, winning the Gold Glove and improving his batting average, but he is still not close to the player he looked like he would be during the first three seasons of his career.

Posted by Metallattorney at 9:24 PM