We were supposed to have the Rule 5 Draft on December 9, but due to the lockout, that will not happen.  Boston had left a couple of decent prospects exposed and I was a little concerned Gilberto Jimenez or Thad Ward would be taken, but that will not happen now.  2021 saw the emergence of easily the best Rule 5 pick Boston had ever selected in Garrett Whitlock, but 2020 saw a decent player as well: 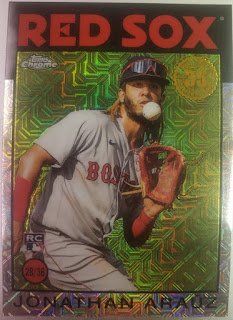 Jonathan Arauz was originally signed by the Phillies as an amateur free agent.  A few years later, he was included with Ken Giles in a deal to the Astros.  The Red Sox selected him in the Rule 5 Draft in 2019 and he managed to spend the entire season on the roster.  Arauz played in 25 games, primarily playing second base, but also appearing at shortstop and third.  He hit .250/.325/.319 with a homer, two doubles and nine RBIs.  He started 2021 in the minors.  The season was not nearly as impressive though.  Arauz remains in the Red Sox system, primarily as organizational depth for now.  The possibility exists that he could be the primary utility man in 2021, depending on how Boston deals with Enrique Hernandez and Christian Arroyo.