There were not a lot of Red Sox Topps Now cards this year.  There simply were not many major highlights during this down season for the Red Sox.  I still have not grabbed all of them, but there were a few I absolutely had to have, and this is one of them. 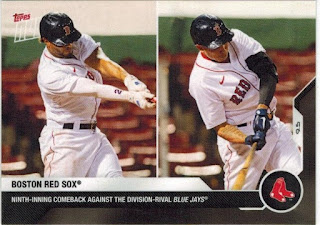 There are two players pictured here, that each helped Boston come back to win 9-8 over the Blue Jays.  The Red Sox were down 8-7 with Anthony Bass on the mound for the Jays going into the bottom of the ninth.  Xander Bogaerts immediately tied the game with a home run to center field.  And thus he appears on the left.  After a walk, a groundout and a stolen base, new acquisition Yairo Munoz came up and hit a sharp ground ball to third, that eventually scored the winning run.  And Munoz appears on the right.
The primary reason I picked up this card is Yairo Munoz.  This is Munoz's first card with the Red Sox.  Munoz played in just 12 games with the Red Sox, but he was impressive.  He hit .333/.333/.511 with five doubles, a home run, two stolen bases and four RBIs.  Munoz played left, right and designated hitter but has played second, shortstop, third and center field in the past.  He looks like a good bet to come to camp and win a utility job next season.
Posted by Metallattorney at 8:00 AM