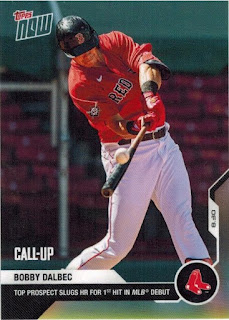 On August 30, 2020, Red Sox prospect Bobby Dalbec made his Major League debut, playing first base and batting eighth against the Washington Nationals.  He struck out in his first at-bat, but then came on again in the third inning with Kevin Plawecki on second base.  He homered for his first hit to right field.  Dalbec was one of the bright spots on the team for the last few weeks of the season, smacking eight home runs in 23 games.  He looks like a good bet for being the full-time first-baseman next season, provided he can cut his strikeouts down.
Posted by Metallattorney at 8:00 AM