Wait, THESE Guys Were Red Sox?

There is a pretty good reason why I made the trade for the next 12 cards.  Well, there are lots of reasons, but four really stand out.  If there is one thing I look for in acquiring cards, it's player selection.  I like sets with a lot of different players and I like getting cards of players who do not have many.  Yes, I like the stars too, but I really like the unknown guys.  I want as much player representation in my collection as possible.  And that brings us to this deal: 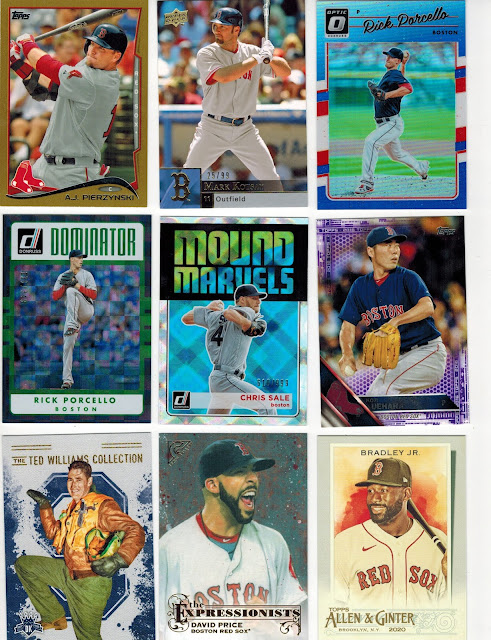 1.  A.J. Pierzynski.  A.J. was a Red Sox catcher very briefly in 2014.  After Jarrod Saltalamacchia left as a free agent, Pierzynski was brought in to replace him and hold the position down until either Christian Vazquez or Blake Swihart were ready.  It was not a great move as Pierzynski had one of his worst seasons and was not well-liked in the clubhouse.  The Red Sox won the World Series the previous season largely by acquiring a bunch of character guys who meshed well in the clubhouse.  That was never Pierzynski's strong point.
2.  Mark Kotsay.  Kotsay actually played parts of TWO seasons in Boston from 2008 to 2009.  He only really appears on the 2009 Upper Deck card and parallels.  Kotsay was used primarily as a defensive replacement in 2008.  Having an outfielder playing first base meant some good defense.  He was well past his prime at this point.
The rest of the guys here are a combination of stars, Hall of Famers, and solid players.  I need to get more Rick Porcello cards.  He is not nearly as large in my collection as he should be considering he won a Cy Young Award with Boston.  That award was certainly surprising.  Koji Uehara is a cult fan favorite player.  He spent just four seasons in Boston but was one of the most memorable players in recent history.

3.  Brad Ziegler.  Ziegler was acquired before the trading deadline from the Diamondbacks to shore up the bullpen in 2016 and it worked out well.  He saved a few games, struck out more than a batter an inning and had an ERA of 1.52.  Boston should have held onto him past the 2016 season.
4.  Aaron Hill.  Hill was another player acquired in 2016 to help solidify third base with less-than-great showings by Pablo Sandoval and Travis Shaw.  Hill did not work out.  He batted just .218 with two home runs in his short stint with Boston.
Posted by Metallattorney at 6:35 PM