The first package was not super exciting, but this one definitely is.  It features an impressive player selection of current stars, prospects, retired players, and a few Hall of Famers.  I love it.  There's even one guy I am willing to bet a lot of people forgot he ever played for the Red Sox. 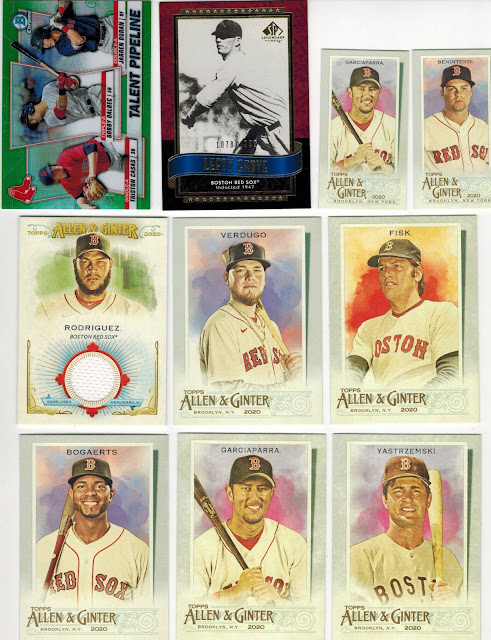 1.  Triston Casas/Bobby Dalbec/Jarren Duran.  This card features three of Boston's top prospects entering this season, though Dalbec has seen quite a bit of Major League time at this point.  It will be interesting to see what they do when Casas is ready, as the team likely will not be able to find a way to work Dalbec, Casas and Rafael Devers into two positions.  Does that mean J.D. Martinez is out at some point?  It's either that or move one of those three.  Dalbec needs to cut down his strikeouts.  Duran is waiting in the wings and could make his debut this season and eventually take over center field.
2.  Lefty Grove.  Grove is one of those Hall of Famers like Babe Ruth that I just have to grab whenever I find a card of him with the Red Sox.  Grove does wear a Red Sox cap on his Hall of Fame plaque but is still better-remembered for his time with the Philadelphia A's.
3.  A&G Cards.  I am not going through every player here.  Alex Verdugo has been a ton of fun to watch in his short time in Boston.  Hopefully he continues to play well to make up for some of the pain of losing Mookie Betts.  The Eduardo Rodriguez card is my first relic of him, though I do have a couple of autographs. 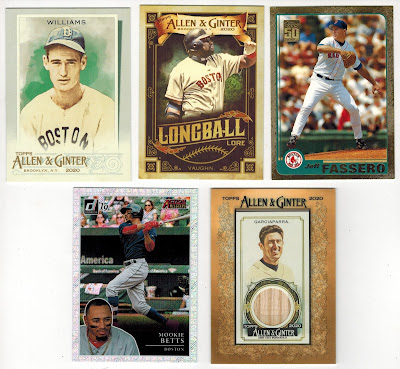 4.  Mo Vaughn.  I love seeing The Hit Dog in new sets.  I was really hoping this meant that he would appear as a Fan Favorites autograph.  Hopefully this year.
5.  Jeff Fassero.  Fassero was brought in to be a middle-rotation starter in 2000.  He spent just the one year in Boston though and it was not a great one.  He was 8-8 with a 4.78 ERA.  Still though, it's fun to find cards of guys like this that are practically forgotten.
6.  Nomar Garciaparra.  Closing things out with my second relic of the package, this one of Boston legend Nomar Garciaparra.  I have a LOT of Nomar relics in my collection.
Posted by Metallattorney at 8:00 AM