I had not originally planned on making one of these posts today, but unfortunately, Don Baylor passed away today.  So I felt it was an appropriate time for a tribute. 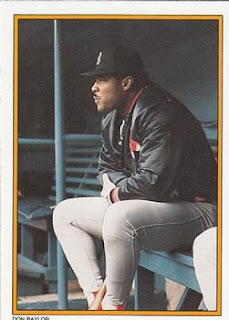 Don Baylor spent about a year and a half with the Red Sox, but he was a big part of the 1986 team.  He was brought over in a rare challenge trade between the Red Sox and Yankees involving each team's designated hitter.  Both teams got a decent deal, but for different reasons.  Baylor was more of a pure power hitter while Easler was more of a contact hitter.  Baylor was the AL MVP for the Angels in 1979 when he hit .296/.371/.530 with 36 home runs and a league-leading 139 RBIs.

In 1986, Baylor helped lead the Red Sox to the AL pennant with a very good year, hitting .238/.344/.439 with 94 RBIs and a team-leading 31 home runs.  Baylor was a veteran presence in the lineup and a calming influence in the clubhouse for a mostly young team.  He won the Silver Slugger Award and even picked up some MVP votes.  Baylor was also a well-known postseason performer and hit .346 in the ALCS before slumping in the World Series.

Baylor started out the 1987 season as the team's starting DH, and was on the verge of a similar season to his 1986 campaign as he was hitting .239/.355/.404 with 16 home runs and 57 RBIs when he was traded to the Twins on September 1 for the stretch drive.  Boston received a minor leaguer named Enrique Rios in the deal, who never made it to the Majors.

After playing one more season with the Athletics, Baylor's playing career came to an end.  He was able to become a Major League manager for several years, first with the expansion Colorado Rockies, and later with the Cubs.  Baylor was a well-regarded personality and popular with teammates and players.
Posted by Metallattorney at 9:34 PM

Email ThisBlogThis!Share to TwitterShare to FacebookShare to Pinterest
Labels: baylor, slightly more than one year