It is getting close to the end of the year, so I decided to enter the Eamus Catuli contest and show off my favorite card of the year. 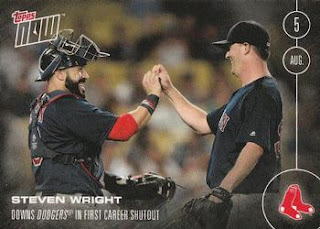 This is the card that kicked off a new mini player collection.  Throughout the years there have been a number of players that I have collected within my Red Sox collection.  Jason Varitek, Felix Doubront, and Jackie Bradley Jr. have been a few of these, but this year I started in on Steven Wright.  The knuckleballer had a breakthrough season, being named to the All Star team in his first full season in the Majors.  Even though Wright has been in the Majors off an on since 2013, he had not had a card released showing him with the Boston Red Sox until this card released from the Topps Now set.  He did pop up in a few late-season sets, but this card was the very first Red Sox card for Wright.

The Topps Now set is a very interesting one.  The idea was to take advantage of recent news and events, and even though they carried things too far at times and were a little expensive, it was a nice way to keep up with current events.  This card celebrates Wright's first career shutout, at the expense of the Dodgers.

Even though I have added a number of other Steven Wright cards since this one, this is the card that started everything.  And since it kicked off a new mini player collection, I think this is an easy choice for my Favorite Card of 2016.
Posted by Metallattorney at 8:00 AM