That Mark Hoyle is Very Generous

The most recent stack of vintage cards came from Mark several months ago but it was right around the time I took a bit of a hiatus.  I am sorry, I should have posted about it sooner.  Here it is: 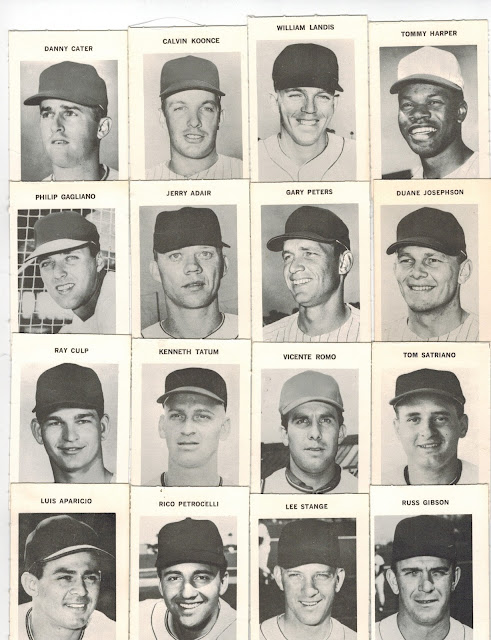 These are Milton Bradley cards and they were released from 1969-1972.  Unfortunately there is no copyright date on any of them so Harry sent me all the ones from players that played for the Red Sox during that time period.  All of the logos are air-brushed away so you cannot tell which teams these guys were with at the time of these pictures.  Some of them are pretty obviously not Red Sox caps, such as the one on Tommy Harper.  But with no team designations, no copyright dates, and no logos, they could represent any team.  So here they are.

There are some interesting players here.  Harper had the Red Sox record for stolen bases in a season when he stole 54 in 1973.  He kept that record until Jacoby Ellsbury stole 70 in 2009.  Danny Cater was acquired in a trade with the Yankees for Sparky Lyle.  That one came back to bite Boston.  Ray Culp was the best pitcher Boston had for a few years.  Luis Aparicio is a Hall of Famer, though not for his time with Boston.  And Rico Petrocelli held the AL record for home runs as a shortstop for a few decades when he hit 40 in 1970.

Thanks Mark!  Sorry about the delay in the post.
Posted by Metallattorney at 9:47 AM