Underrated Player of the Year: 1994 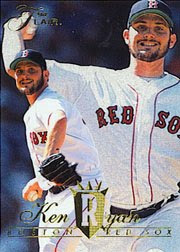 1994 - KEN RYAN
Ken Ryan was not really a complete surprise. He was touted to be a potential closer-in-waiting, but in 1994 he took the next step. Boston entered the season with Jeff Russell as the incumbent closer, but ineffectiveness and the rise of Ryan eventually lead to him being traded to the Indians for Chris Nabholz and Steve Farr.

Ryan was given the closer position in 1995 from the start of the season, but he struggled and was eventually replaced when Boston acquired Rick Aguilera. Ryan was dealt after the season for another closer Heathcliff Slocumb.
Posted by Metallattorney at 6:55 PM

Email ThisBlogThis!Share to TwitterShare to FacebookShare to Pinterest
Labels: ryan, underrated player of the year