Underrated Player of the Year: 1993 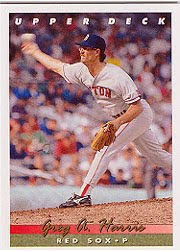 1993 - GREG A. HARRIS
I would have picked Danny Darwin for this post, but I have already covered his surprising 1993 season in another post. So, here we are with the remarkably versatile Greg A. Harris.

After two okay seasons in the rotation, Harris was moved to the bullpen full time in 1992 and responded with a pretty good season. In 1993, Harris was essentially the long man out of the bullpen, but his numbers were very impressive. He lead the league with 80 games pitched, which was a Red Sox record for some time. Think about that, there are 162 games in a season, and he pitched in 80 of them. No wonder he blew his arm out in 1994. He threw 112.1 innings, which is unheard of out of relievers these days. Harris finished the year at 6-7 with a 3.77 ERA and 103 strikeouts versus 60 walks. His WHIP was 1.380.

1993 was still fairly early in the reformation of bullpen roles, so Harris's season stands out quite a bit today. He was an absolute workhorse that year. He was the most consistent reliever on the team and helped in a variety of ways, even picking up eight saves. The bullpen would have been in a lot of trouble without Harris.
Posted by Metallattorney at 10:56 AM

Email ThisBlogThis!Share to TwitterShare to FacebookShare to Pinterest
Labels: harris, underrated player of the year