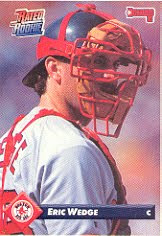 In the early 1990's, the Red Sox had a number of highly-touted catching prospects in the minor leagues. Scott Hatteberg, John Flaherty, and Eric Wedge were all expected to one day star in the Major Leagues. All three players made it, but none of them were really stars at all. Wedge was perhaps regarded the highest of the three players and did the least of the three at the Major League level.

Wedge was a third-round pick in the 1989 draft and skyrocketed through the Red Sox system, making his Major League debut in 1991 with one at-bat on the last day of the season. He singled.

Wedge only played in nine games for the Rockies in 1993 and was back in Boston for 1994, but only made it into two games. That was the end of his Major League career. Wedge bounced around the minors for a couple more years before giving up in 1997. He was 29 when he retired.

Since then, Wedge has made it back to the Major Leagues as a manager for the Indians and now Mariners. He has been far more successful as a manager than he ever was as a player.
Posted by Metallattorney at 8:37 PM