I did something I have never done before with the Topps Now cards.  I bought the entire bundle for one day.  The day: Game 5 of the 2018 World Series, better known as the day the Red Sox won the World Championship.  All nine cards were Red Sox so it was a pretty easy call. 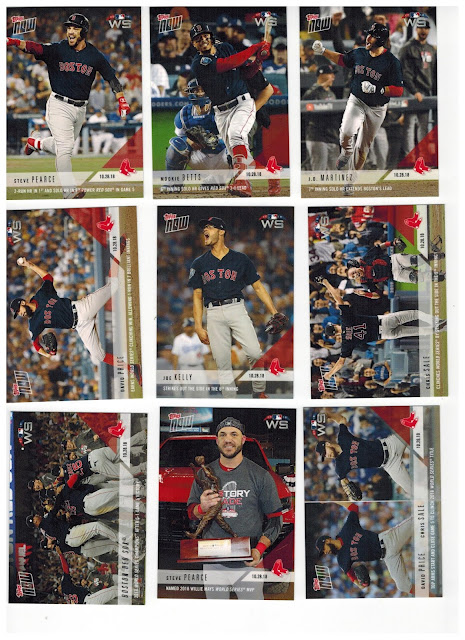 1.  Steve Pearce.  Pearce hit two home runs in Game 5, including one right away in the first inning.  Pearce was dialed in from the last half of Game 4 on.

2.  Mookie Betts.  After struggling throughout most of the postseason, it was nice to see Mookie hit one out and add to the lead.

3.  J.D. Martinez.  Like Betts, Martinez also struggled a little bit, and he also hit a home run in the deciding game.

4.  David Price.  Price has been mostly vindicated.  Long criticized due to bad postseason performance, Price won three games that were all hugely important in this year's postseason.  And he did it in convincing fashion.

5.  Joe Kelly.  Kelly struck out the side in the eighth inning, something that I am sure a lot of teams will remember when they try to sign him as a free agent this offseason.

6.  Chris Sale.  Sale came on in the ninth and also struck out the side, including making Manny Machado look really bad with a sick slider for the last out in the game, and the season.

7.  Team Card.  Here is the celebration after the final out.

I am going to remember this year for a long time.  Some time I will look at the four World Series Championships I have seen and compare them.  Right now, I am still basking in the glow.
Posted by Metallattorney at 8:00 AM