I Had No Choice. It Had to be Done.

I have previously resisted the urge to ever buy one of those booklet cards.  They do not fit at all in my binders.  I just have not taken the plunge.  But one came out recently that left me with no alternative.  I had to buy it.  It would be terrible if I did not.

Here is the front: 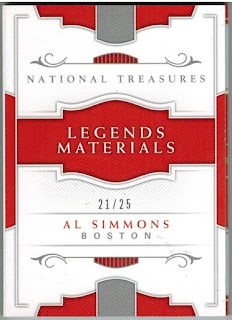 Yes, that is a card of Al Simmons with the Red Sox.  I do not believe there is a single other card out there that depicts "Bucketfoot" with Boston, other than exceptionally rare Panini cards.  As such, my collection was missing a Hall of Famer.

Sure, Simmons is not in the Hall of Fame because of anything that he did in Boston.  I covered that here.  He played in just 40 games with Boston in the penultimate season of his career when he was 41 years old.  That is old now, it was ancient for players in that time period.  It was a war year and teams were just looking for warm bodies to fill their rosters.  Simmons qualified though he did not hit much, with just a .203/.248/.263 line.  He did hit his final home run in a Red Sox uniform.

I can not let a Hall of Famer be absent in my collection.  It is bad enough that there are no cards available of so many players.  There are other Hall of Famers absent from my collection, like Jesse Burkett, Jack Chesbro, and Waite Hoyt.  But you can bet I would do the same thing if one popped up like this one.

Here it is open: 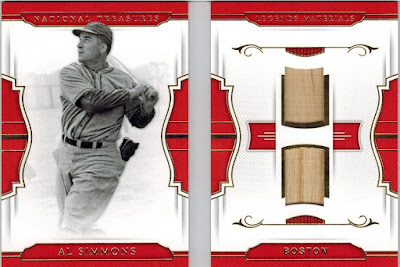 I have no idea if he is actually wearing a Red Sox uniform, though it is possible.  But it is clearly identified as a Red Sox card.  I have not even mentioned that it is a bat relic card.  I have not been buying a ton of relics lately, but you can bet I will if it is a player like this.