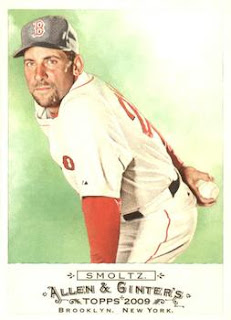 This is a somewhat timely post as Smoltz was one of the primary announcers during the Red Sox run through the 2018 World Series.  He came off fairly curmudgeonly and bitter.

Smoltz was nearing the end of his career when he signed a free agent deal with the Red Sox before the 2009 season.  He was 42 years old and coming off of a season in which he pitched in just eight games.  This was his first time wearing a Major League uniform for a team other than the Atlanta Braves for whom he had won 210 games, saved 154, and struck out over 3,000 batters.

Things did not work out well for Smoltz in Boston unfortunately.  He pitched in just eight games with an awful 2-5 record and an 8.33 ERA.  His control was decent as he struck out 33 and walked just nine in 40 innings.

The Red Sox cut ties with Smoltz in August of 2009 and he hooked on with the Cardinals to finish out the year, and his career.  He made an appearance in the postseason with St. Louis.  Smoltz's time in Boston was brief and not at all successful.  Smoltz was elected to the Hall of Fame in 2015, his first year on the ballot.  He wears a Braves cap on his plaque.  There was no way in hell he was going to be wearing a Red Sox cap.
Posted by Metallattorney at 8:00 AM