Someone on the trading forums recently put up a lot of Red Sox cards for a fixed price, no doubt hoping to capitalize on the team's recent World Series win.  Apparently he had the lot up for a little while with no takers.  Lucky me.  There was some pretty good stuff in there for a Red Sox fan like myself.  I grabbed it. 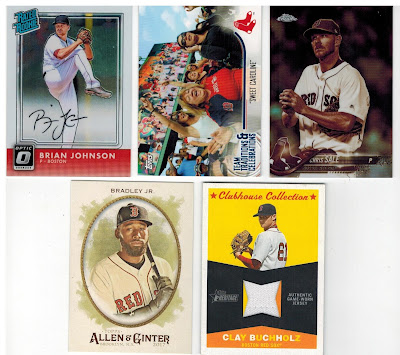 There were quite a few duplicates in the lot, but there were four cards that absolutely sold me on it.  The Brian Johnson autograph was the first.  Johnson is probably not going to last much longer in Boston, but he has had some good moments.  The Clay Buchholz jersey card was the second one.  I also really liked the Chris Sale card, though not so much that it convinced me to buy the lot. 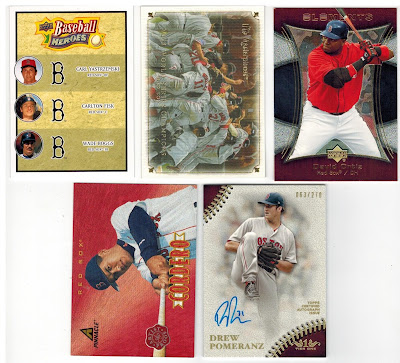 Wil Cordero was the third card.  This is an Artist Proof and it looks fantastic in person.  The fourth card was the clincher.  It is the Drew Pomeranz auto.  Even though he is likely not going to be in Boston much longer either, I had to add an auto of him.  He had a great 2017 season, but was mostly disappointing otherwise.  The other base cards all knocked stuff off of my wantlist.

So this was a pretty good buy.  For a decently low price, I added autographs of Johnson and Pomeranz and a relic of Buchholz, as well as a great parallel card of Cordero, plus some other randomness.
Posted by Metallattorney at 8:00 AM