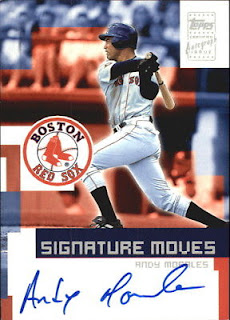 In the 1990's there started to be an influx of players defecting from Cuba and coming to the U.S. to play.  Rene Arocha, Livan Hernandez, and Orlando Hernandez had varying levels of success.  That resulted in more players coming over.  One of these players was Andy Morales, a contact-hitting third-baseman with a little bit of power.  Morales attempted to defect once before managing to successfully defect in 2000.

After the success of Orlando Hernandez, the Yankees decided to take another chance on a Cuban defector and signed Morales and assigned him to the minor leagues.  However, it was eventually discovered that Morales lied about his age.  He was actually three years older than originally thought and it is a completely different thing for a 26-year-old player coming from another country and hitting .231 in AA than a 29-year-old.  The Yankees attempted to void his contract but eventually just released.

The Red Sox took a chance on him and signed him for the 2002 season.  He played for Trenton in AA and hit .231/.348/.282 with no home runs and two RBIs in 16 games.  Boston also released him.  Somehow, he received a card, despite playing just 16 games in the organization and none above AA.  Stranger still, his only card with the Red Sox is an autograph.  How often does that happen?
Posted by Metallattorney at 11:00 AM

Email ThisBlogThis!Share to TwitterShare to FacebookShare to Pinterest
Labels: morales, one card wonder