There are a few of these Factory Team Sets out there that I still needed, so I recently grabbed a couple of them.  The first one was the 2014 set, which is mostly made up of players from the 2013 World Championship team, the Boston Strong team. 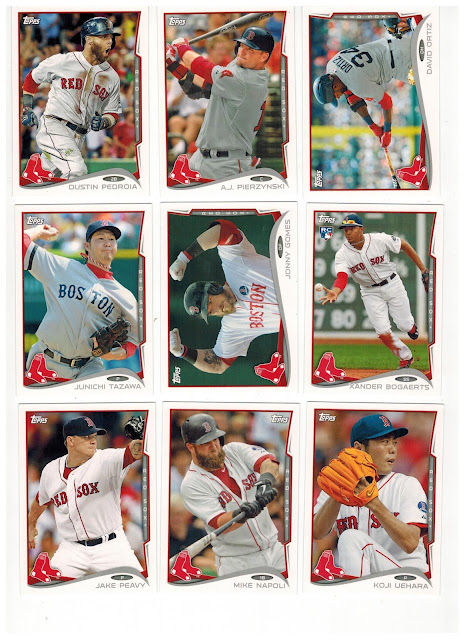 1.  Dustin Pedroia.  Pedroia had a typically great season in 2013, being voted to his fourth All Star game and winning his third Gold Glove.  He hit .301/.372/.415 with nine home runs and 84 RBIs.  He also stole 17 bases.  I remember I had him on my Fantasy Team that year, picking him late in the first round.  I finished in the money that year.

2.  A.J. Pierzynski.  This was the only new acquisition in the set.  Pierzynski was signed to replaced the departed free agent Jarrod Saltalamacchia.  This signing did not work out.  He played in 72 games before being released, hitting just .254/.286/.348 with four home runs and 31 RBIs.  It was a far cry from his previous two seasons in Texas.  He also did not work well with Jon Lester apparently.

5.  Jonny Gomes.  Gomes had some major clutch hits during the regular season, walking off a couple of games and delivering several pinch-hit home runs.  In a mostly platooned role with Daniel Nava, he hit .247/.344/.426 with 13 home runs and 52 RBIs.

6.  Xander Bogaerts.  Bogaerts made his Major League debut in 2013, and essentially took over at third base when Will Middlebrooks struggled.  Bogaerts played in just 18 games, but he did hit his first Major League home run and hit .250/.320/.364.

7.  Jake Peavy.  Peavy was the major trading deadline pickup in 2013, acquired from the White Sox in a three-team deal that cost Boston Jose Iglesias.  He pitched reasonably well down the stretch, making ten starts and going 4-1 with a 4.04 ERA while striking out 45 and walking 19 in 64.2 innings. 10.  Jackie Bradley Jr.  JBJ also made his Major League debut in 2013 after a terrific Spring Training performance.  He did not do nearly as well in the season though and was sent back to the minors for more seasoning.  He hit just .189/.280/.337 with three home runs.

12.  John Lackey.  After missing the entire 2012 season while recovering from Tommy John surgery, Lackey finally proved to be worth his contract in 2013 turning in a 10-13 record, but with a 3.52 ERA, striking out 161 while walking 40 in 189.1 innings.  He also turned in some gutsy performances in the postseason.

13.  Will Middlebrooks.  A lot was expected of Middlebrooks after he took over for Kevin Youkilis and started strong.  Unfortunately, Middlebrooks hit just .227/.271/.425 with 17 home runs and 49 RBIs.  He would eventually lose his starting job and never returned to his 2012 success.

14.  Felix Doubront.  Doubront had a nice sophomore season, going 11-6 with a 4.32 ERA, striking out 139 and walking 71 in 162.1 innings.  Doubront mostly pitched out of the bullpen in the postseason, but he was very impressive.

15.  Clay Buchholz.  There is no way to tell how good Buchholz's 2013 season might have been had he stayed healthy.  He was named to the All Star team for the second time in his career and was the favorite for the Cy Young Award until he went down with an injury.  His regular season numbers were a 12-1 record and a 1.74 ERA.  He notched 96 strikeouts and 36 walks in 108.1 innings.

16.  Shane Victorino.  The signing of Victorino drew a lot of criticism, but he had a terrific season, hitting .294/.351/.451 with 15 home runs and 61 RBIs, while stealing 21 bases.  He had some huge hits in the postseason, including a grand slam in Game 6 of the ALCS that drove the nail in the Tigers' season.  Finally, he won a Gold Glove Award.

17.  Fenway Park.  Boston clinched the World Series at Fenway, for the first time since 1918.  It was also the site of the famous Ortiz speech after the Boston Marathon bombing.
Posted by Metallattorney at 8:00 AM No comments: 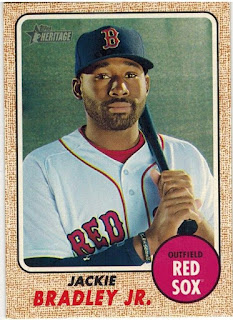 Just a one-card mailday today.  This is the 2017 Heritage short print of Jackie Bradley Jr., when he was coming off of his best Major League season, hitting .267/.349/.486 with 26 home runs and 87 RBIs.  He was an All Star that season for the only time in his career thus far.  He has always been a very streaky hitter, but that was the best year of his career so far.
Posted by Metallattorney at 8:00 AM No comments:

We really need some more products released soon.  I really want to open some packs, but there are so few sets out right now and even fewer that have a decent number of Red Sox cards I need.  Gypsy Queen was one, so I tried out another blaster.  This one went better than the last one, but there was one duplicate, and it was the Pedro Martinez short print I pulled a few weeks ago.  That was disappointing.  The break was decent though.

Devers is the second green parallel I have pulled for the Red Sox.  Then there are the base cards of Brock Holt, possibly one of the last Red Sox cards of him that will be released, and the player that is essentially his replacement, Michael Chavis.  If only that Pedro card had been Ted Williams or Carl Yastrzemski, this would have been a really good break.
Posted by Metallattorney at 8:00 AM No comments: 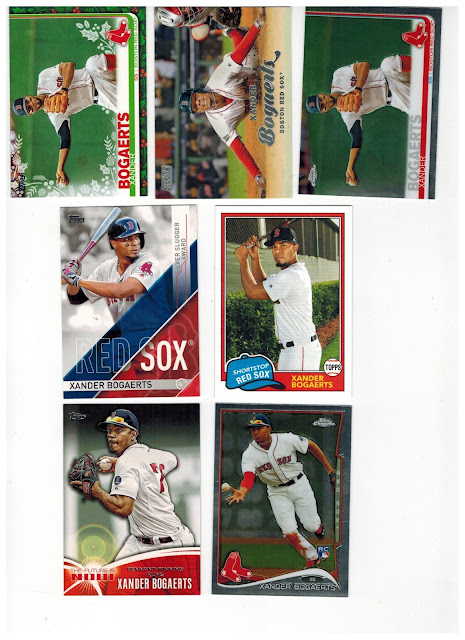 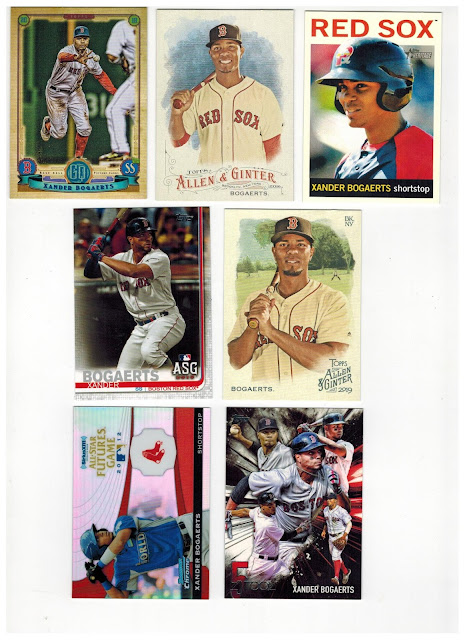 There are a number of highlights to this lot, including the 2014 Topps Chrome RC, the 2012 Bowman Chrome Futures Game and the 5 Tool card.  And yes, several of these cards completed team sets.  With Bogaerts becoming the major veteran star in the Red Sox lineup, it was time to fill in some of those gaps.
Posted by Metallattorney at 8:00 AM No comments:

I can imagine it would be fairly disappointing to pull a manager autograph as the big hit in a break.  Managers do not typically have a big following, so selling or trading the card would be somewhat difficult.  There are exceptions of course.  I suspect even a manager autograph of someone like Don Mattingly would have a market.  This is because he had such a huge following when he was a player.  But someone like John Farrell, who managed the Red Sox during the 2013 World Championship season, probably does not have much of a market.  So I can imagine the seller of the below card might have been somewhat disappointed with this pull: 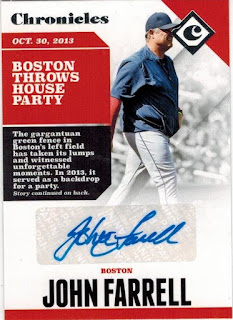 I was perfectly willing to shell out a few bucks for this one.  I think it is kind of interesting to have a manager autograph card.  This one will look good next to my Don Zimmer relic card.
Posted by Metallattorney at 8:00 AM 2 comments:

Well, this blaster break was not great.  Technically, I pulled four Red Sox cards.  Here is the scan of my new Red Sox pulls: 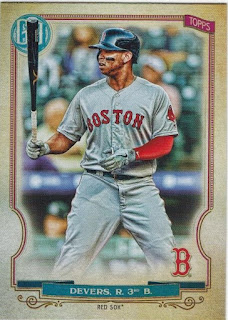 You may have noticed that I did not scan four cards, or three, or even two.  Somehow, I pulled three duplicates, even though I have nowhere close to the team set from this release.  I pulled the Mookie Betts green card again (I am pretty sure my green packs was exactly the same as the prior one), Eduardo Rodriguez and J.D. Martinez.  At least I also pulled the Rafael Devers.  It was not a total loss.
Posted by Metallattorney at 8:00 AM No comments:

My recent batch of maildays have included a bunch of random Etopps cards (you know, the original online-only cards) and short prints and photo variations.  Not sure why that is, it just worked out that way: 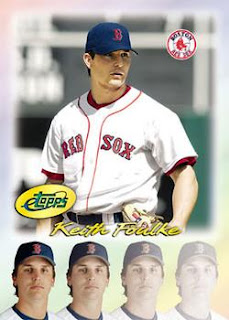 1.  Keith Foulke.  Foulke only had one successful season with the Red Sox, but he was a huge reason for the team's World Championship run.  He pitched to a 2.17 ERA and saved 32 games.  Then, he was unstoppable in the postseason, giving up just one run in 14 innings and striking out 19 while notching three saves and a win. 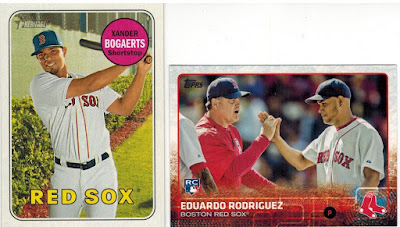 2.  Xander Bogaerts.  This is a Heritage short-print.  I have not been doing a great job at grabbing these things all the time.  For some reason Bogaerts in particular often eludes me.

3.  Eduardo Rodriguez.  I had forgotten this card existed until deciding to look for some E-Rod cards I needed.  Nice cameo by former manager John Farrell here. 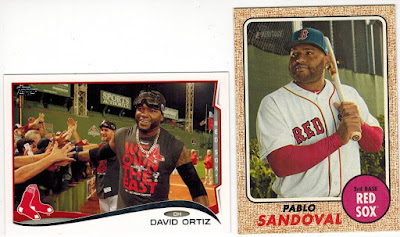 4.  David Ortiz.  This is a photo variation depicting Ortiz celebrating presumably the team winning the AL East title in 2013.  Just basing that on the t-shirt.

5.  Pablo Sandoval.  Another Heritage short print.  I remember specifically wanting Boston to sign Sandoval.  Things did not work out well. 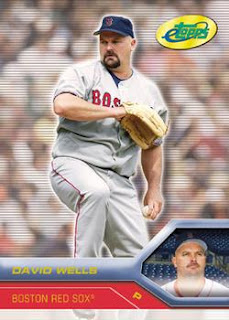 6.  David Wells.  More Etopps cards.  Wells started the only game I have seen at Fenway Park to date.  He took the win, though he was hit in the kneecap with a line drive and had to leave. 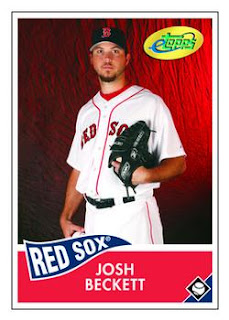 7.  Josh Beckett.  Beckett was maddeningly inconsistent from year to year.  There were times he was an ace, but others where he was dreadful.  But he was a huge part of the 2007 World Champions. 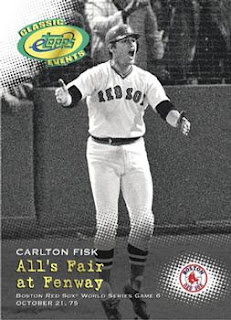 8.  Carlton Fisk.  I really want to go through my collection and find all the cards commemorating Fisk's walkoff home run in Game 6 of the 1975 World Series.  Here is yet another one.  I suspect there will be a fair number.
Posted by Metallattorney at 8:00 AM 2 comments: