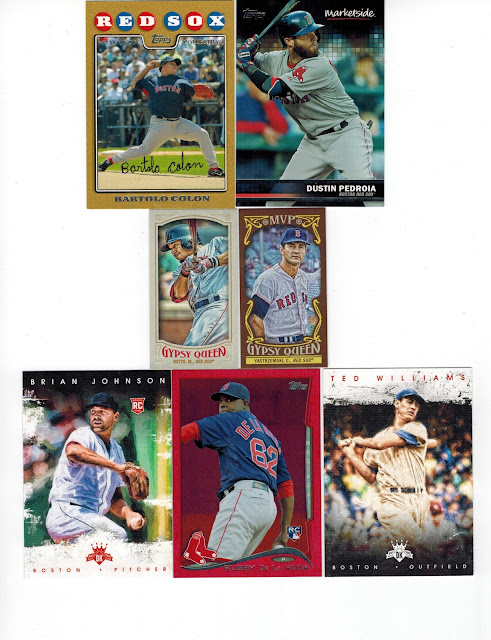 This trade package came from a member on a trading forum and includes a couple of pitchers that did not have a lot of cards of their Boston stints.  It started out centering around the Marketside Dustin Pedroia, but expanded into a pretty interesting lot of cards.

1.  Bartolo Colon.  Yep, he pitched for the Red Sox.  For seven games in 2008.  He was attempting a comeback from some pretty serious injuries.  He pitched reasonably well, but there were some concerns about his motivation and his conditioning.  Eventually Boston simply shut him down.  He had not yet become the lovable pitcher that he is now in New York.

2.  Dustin Pedroia.  This is the remaining Marketside card I needed and was the initial centerpiece of the trade.

3.  Mookie Betts.  This is the photo variation of the mini card and was a bit tougher to talk the other trader into.  But I ended up with it.

4.  Carl Yastrzemski.  This card was a wantlist need.  It celebrates Yaz's 1967 MVP when he won the Triple Crown and almost single-handedly willed Boston into making it to the World Series.

5.  Brian Johnson.  Nice to see Johnson get a bunch of cards this year, but I have to wonder, why has he gotten so many?  He pitched in one game for Boston last year.  Steven Wright still has not appeared on a Major League card with the Red Sox, despite pitching in 26 games over the past three years.

6.  Rubby De La Rosa.  The centerpiece of Boston's side of The Nick Punto Trade never really got things going.  He would have flashes of brilliance but then be maddeningly inconsistent.  Boston eventually moved him and their other top acquisition in the trade, Allen Webster, for Wade Miley, which worked out reasonably well, though De La Rosa had a decent year for Arizona.

7.  Ted Williams.  I love a trade that closes out with The Splendid Splinter.  This is actually a more unusual photo.  Topps seems to use the same two or three all the time, but this one is different.
Posted by Metallattorney at 8:00 AM