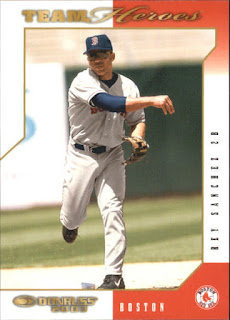 Rey Sanchez was a very good-fielding middle infielder who did not hit a lot.  He came up with the Cubs and played mostly shortstop for them for several years.  He moved over to second base after Ryne Sandberg retired.  Sanchez bounced around a little bit after that, playing with the Yankees, Royals, Giants, and Braves.  He solidified his reputation as a good defensive player while hitting just enough to stay in the lineup.

Boston signed him prior to the 2002 season to solidify second base after purging the roster of Mike Lansing, Jose Offerman, Lou Merloni, and Chris Stynes the previous season.  He proved to be everything he was advertised to be as he hit .286/.318/.345, decent numbers, but certainly not dazzling.  But he was once again terrific in the field.  He never hit for much power, but he managed to hit his first home run since 2000 that season.  For the season, he was a 1.4 WAR player, much of that coming from his defensive prowess. 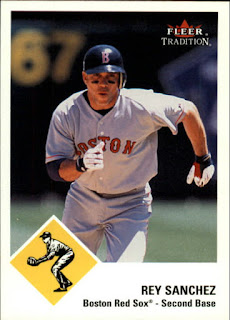 Sanchez was allowed to leave as a free agent after the season.  Boston decided to go with a more offensive player at second base, picking up Todd Walker, himself only lasting one season.  But where Walker was better with the bat, he was a significant step down with the glove.
Posted by Metallattorney at 3:05 PM

Email ThisBlogThis!Share to TwitterShare to FacebookShare to Pinterest
Labels: one year wonder