Schilling Jersey and Some Wantlist Hits

I'm caught up.  I am writing this today.

Here we have a recent trade that was centered around a Curt Schilling jersey card, but was expanded to include a bunch of other stuff, most of which was from my wantlist: 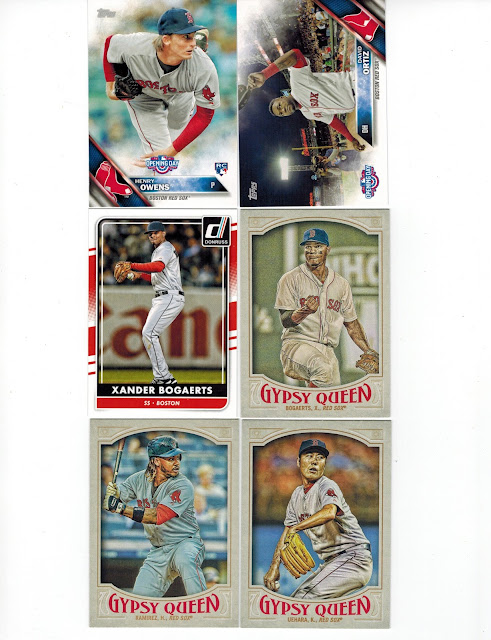 1.  Henry Owens.  Owens has been an enigma in the Major Leagues.  He has been terrific in the minors, but he just walks too many hitters at this point to be an effective Major League pitcher.  He could end up being tradebait.

2.  David Ortiz.  He has been so good that it is starting to become questionable that he will actually retire at the end of the season.  I still believe that he will.

3.  Xander Bogaerts.  For some reason a bunch of Bogaerts cards are all I need from 2016 Donruss on my wantlist.  This cuts it down to the Diamond King subset card and the 1982 insert.

5.  Hanley Ramirez.  After a slow start to the season, Hanley has started to hit a little better.  Nothing compared to some of the other players, but he has been hitting.

6.  Koji Uehara.  Now that Carson Smith is back, Boston's bullpen has become a big strength. 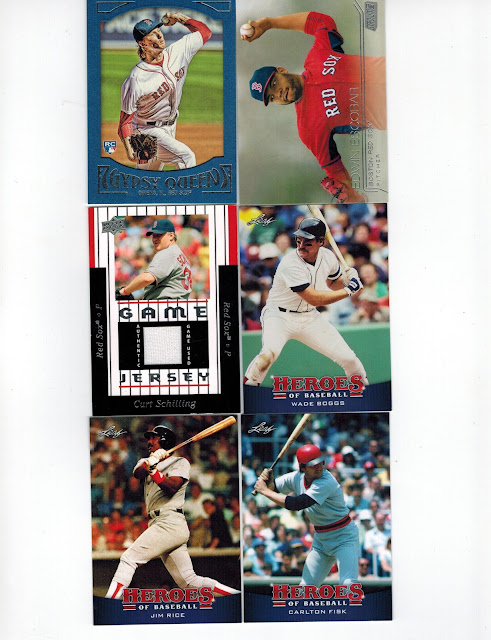 8.  Edwin Escobar.  Escobar was recently lost to the Diamondbacks on waivers.

9.  Curt Schilling.  Schilling's mouth cost him his job with ESPN.  I can't say I am all that surprised.  Hopefully he learned something.

10.  Wade Boggs.  I was not aware of these Heroes of Baseball cards, but I like them quite a bit.  Boggs will have his uniform number retired by Boston this year.