Another Bowman Blaster and a One-Card Mailday 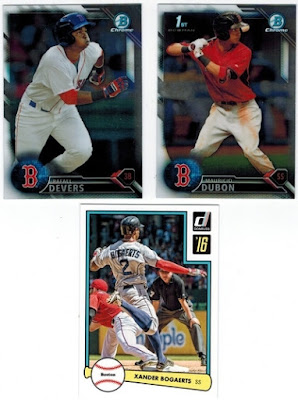 I bought another Bowman blaster.  I pulled a bunch of Red Sox doubles, which is kind of ridiculous since I only had six cards previously.  The only new cards were the chrome versions of a couple of prospects that I had already: Rafael Devers and Mauricio Dubon.

Then I had a one-card mailday that landed me the 1982 insert of Xander Bogaerts from this year's Donruss set.  I noticed right away that these cards had some great photography and the Bogaerts did not disappoint either.  Plus, you can't tell there is no MLB license on this card.  Even better.
Posted by Metallattorney at 7:36 PM