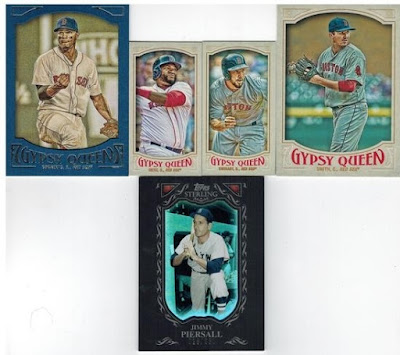 Maildays have become more and more infrequent lately.  I have not been as active on the trading forums and I have been cutting back my Ebay spending.  Not really sure why.  Boston has been playing very well and certain players have been a lot of fun to watch.  Today I received two packages, one including a small trade that I worked out, entirely made up of Gypsy Queen cards, and the other a one-card buy off of Ebay.

1.  Xander Bogaerts.  Bogaerts has begun to emerge as the best shortstop in the American League.  He is flashing a bit more power this year and won the Silver Slugger last year.  He has also been better defensively.

2.  David Ortiz.  Ortiz has continued his own hot streak.  He had a huge game against the Yankees last week, tying the game in the ninth and winning it in the 11th.

3.  Blake Swihart.  Swihart was called back up today, to play left field while Brock Holt is injured.

4.  Carson Smith.  Unfortunately, Smith finally made it back from injury, only to be hurt once again.

5.  Jimmy Piersall.  Piersall is one of the all-time characters in Red Sox history.  He was also a very good player, and an excellent defensive outfielder.
Posted by Metallattorney at 8:31 PM