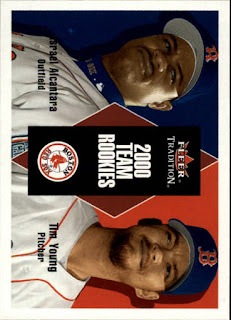 Tim Young's Major League career consisted of just 18 games over two seasons, spread across three years.  He was originally drafted by the Montreal Expos in 1996, yet managed to move quickly through their system, making his Major League debut in 1998.  He did not pitch well in 10 games and did not make it back to the Majors until 2000, after he had signed on with the Red Sox.

Young pitched in eight games with the Red Sox, mostly in May.  Again, he did not pitch well.  The southpaw pitched seven innings, giving up five runs.  He struck out six and walked just two over those seven innings, but gave up seven hits as well.

After the season, Young was sold to the Hiroshima Carp of Japan.  He signed back with the Boston organization before the 2002 season, then bounced around from team to team, never making it back to the Majors.  As a left-handed pitcher though, he was a valuable commodity, even if he didn't make it back to the big leagues.  He left baseball after the 2004 season.

Somehow he managed to appear on a Major League card with the Red Sox, despite sharing it with Israel Alcantara.  He did have a few cards with the Expos previously as well.
Posted by Metallattorney at 7:27 PM