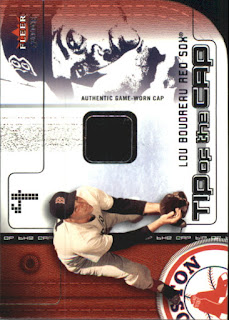 Another player who was past his prime when he was acquired by Boston was longtime Cleveland Indians shortstop and player-manager Lou Boudreau.  Boudreau had long been a tormentor of the Red Sox, having guided his team to a one-game playoff win over Boston in 1948.  He was named MVP that year and was a one-man wrecking crew in the one-game playoff, hitting two home runs in four hits.  He was also one of the managers to utilize the shift against Ted Williams.

Boston acquired him in late 1950 largely with an eye towards him taking over as manager.  Boudreau did not play a lot in 1951, his first year with Boston.  Johnny Pesky was still going strong as the shortstop, with Vern Stephens also still in the fold.  Steve O'Neill had taken over as manager the previous season after Joe McCarthy was fired.  Boudreau was reasonably productive in 82 games, hitting .267/.353/.396 with five home runs.

The next season, Boudreau was named player-manager, though he did not play very often.  He appeared in just four games, without a hit.  He would manage the team through the 1954 season, attempting to bring in an infusion of youth.  He alienated many of the team's stars, leading to the retirements of Bobby Doerr and Dom DiMaggio and the trade of Pesky.  His managerial record with Boston was 229-232.

Boudreau is in the Hall of Fame for his time with the Indians.  He was a great player with Cleveland and won the MVP in a terrific 1948 season.  His time in Boston is not terribly relevant to his Hall of Fame career, and his managerial stint is best forgotten.
Posted by Metallattorney at 8:00 AM