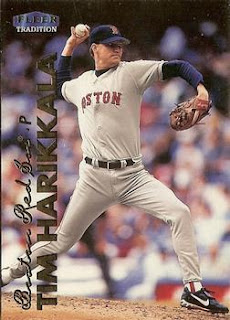 Tim Harikkala is the definition of journeyman pitcher.  Originally drafted in 1992 by the Mariners, he actually made his Major League debut in 1995.  He pitched in one game that year and one game the year after.  After that, it was not until 1999 that he made it back to the Major Leagues, this time with the Red Sox.

Harikkala made it into seven games with the Red Sox, all as a relief pitcher.  He pitched in 13 innings, giving up 15 hits, walking six, and striking out seven.  He ended up with a 6.23 ERA.  Somehow, he made it onto this card, despite such a short stint in Boston.  He was allowed to leave as a free agent after the season.

After his time with Boston, Harikkala signed with the Brewers, though he did not make it back to the Majors.  He made it back to the Major Leagues with the Rockies in 2002 and actually spent a large part of the season as a somewhat dependable reliever, making it into 55 games.  The following year he was back to shuttling between the minors and majors with the Athletics.  He returned to the Rockies in 2007.  And that was the last time he appeared in the Major Leagues.

This is one of just a small handful of Major League cards of Harikkala, and the only one with Boston.  Oddly he does not appear on a card with the Rockies, despite that being the only team for whom he spent any significant amount of time.
Posted by Metallattorney at 6:38 PM