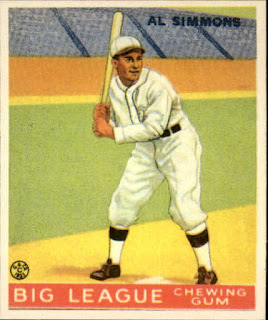 The seasons during World War II were kind of weird for Major League Baseball.  Due to the draft being in place, virtually every able-bodied young man was sent to war.  This had a profound impact on the sport because a number of young stars were gone.  This lead to a lot of players who ordinarily would not have made it to the big leagues being thrust into the spotlight.  In addition, a lot of players who were well past their prime were able to hang out.  Al Simmons was an example of the latter for Boston in his one season.

"Bucketfoot" (so named due to his odd batting stance) was 41 years old in 1943 and likely was only there due to a lack of other players.  Boston was hit particularly hard by the war and turned to a number of over-the-hill players.  Simmons did not even play the previous season and only made it into 40 games for the Red Sox.  He did not hit particularly well either.

Simmons had his best years with the Philadelphia Athletics, but played for a number of other teams over the course of his career.  He accumulated nearly 3,000 hits and hit 300 home runs with a .334 career batting averge.  His Hall of Fame plaque has an A's cap on it.  His time with Boston is mostly irrelevant to his consideration for Cooperstown.
Posted by Metallattorney at 9:59 PM

Email ThisBlogThis!Share to TwitterShare to FacebookShare to Pinterest
Labels: red sox in cooperstown