Boston returned to the postseason in 2003 for the first time since 1999 and took the Yankees to extra innings of Game 7 of the ALCS before Aaron Boone ended their season.  There were not too many Red Sox who did not appear in cards thanks to Topps Total and Upper Deck 40 Man.  Dave McCarty, Andy Abad, Bill Haselman, Damian Jackson, Steve Woodard, Ryan Rupe, Rudy Seanez, and Bob Howry all had very few cards, but still had some, unlike these next few guys. 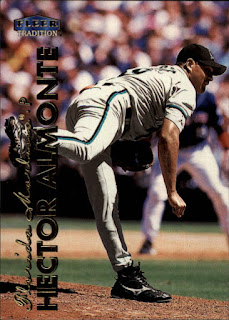 After spending ten years in the Florida Marlins organization, including a brief 15 game stint at the Major League level, Almonte left the only organization he had ever known and joined the Boston Red Sox.  He actually pitched reasonably well in his 1999 Major League tenure, going 0-2 with a 4.20 ERA and eight strikeouts in 15 innings.  He did not pitch nearly as well for the Red Sox in 2003 as he had for the Marlins.  He made it into just seven games in June, 2003 and pitched poorly.  He was 0-1 with an 8.22 ERA and struck out six while walking seven in 7.2 innings.  He was granted free agency in July and was picked back up by the Marlins and pitched marginally better in 28 games for them.  He bounced around from team to team afterwards, but never made it back to the Major Leagues.  Almonte does appear in Red Sox minor league sets. 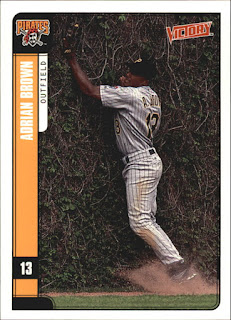 After several seasons with the Pittsburgh Pirates, including two in which he was a regular player in his mid 20's, Brown was signed as a free agent with the Devil Rays after the 2002 season.  Tampa Bay left him off of their 40 man roster though and the Red Sox selected him in the 2002 Rule 5 Draft.  He was returned to the Devil Rays when he did not make the Major League team, as per the draft's rules, but then was released and Boston signed him as a minor league free agent.  So it was a pretty convoluted way that Brown ended up with Boston.  Brown had been a pretty good player earlier with Pittsburgh, hitting .315/.373/.432 in 2000.  He was an All Star for Pawtucket in 2003, hitting .282/.347/.359 with five home runs, 32 RBIs, and 34 stolen bases.  Boston was pretty stacked with position players in the Majors though, so there was no room for him on the roster until September.  He played in just nine games with Boston, hitting .200/.250/.200.  He did steal two bases.  He signed as a free agent with the Angels after the season and appeared in just five games with them.  Then he showed up with the Rangers in 2006 for a 35 game stint.  That was it for Brown at the Major League level.  Brown does have cards in Pawtucket sets. 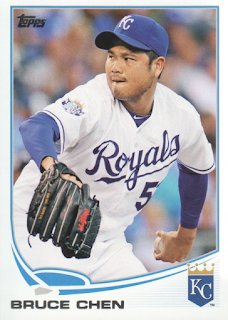 Somehow, Bruce Chen managed to have a 17 year Major League career.  He played for eleven teams in that period, having most of his success with the Royals toward the end of his career.  His early career was characterized by a lot of bouncing around, obviously.  He made his Major League debut at 21 with the Braves, then played with the Phillies, Mets, Expos, Reds, and Astros before being picked up on waivers with the Red Sox in May, 2003.  He pitched in just five games for the Red Sox in May of that season, starting two.  He was 0-1 with a 5.11 ERA in 12.1 innings.  He struck out 12 and walked just two.  He was sent to the minors and did not make it back to the Majors that season despite some decent numbers.  Later on he played for the Orioles, Rangers, Royals, and Indians. 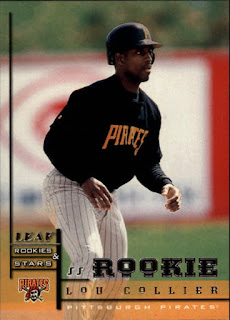 Like Adrian Brown, Lou Collier was once a promising prospect with the Pirates.  Also, like Brown, Collier was a minor league All Star with the Pawtucket Red Sox in 2003.  Collier came up with the Pirates in 1997 and was their regular shortstop in 1998, despite subpar numbers.  He was placed on waivers and picked up by the Brewers after the season.  After a couple of uninspiring seasons with the Brewers, he plated with the Expos in 2002 and signed a minor league contract with the Red Sox.  Collier hit .293/.354/.469 with 14 home runs and 69 RBIs with Pawtucket in 2003, while playing a variety of positions.  Like Brown, Collier was a late-season call-up and made it into just four games, mostly as a defensive replacement.  He had just one at-bat and was hitless.  He joined the Phillies the next season for another short stint, but did not appear in the Majors again.  He did spend a couple of years in Japan.  Collier also has a couple of Pawtucket Red Sox cards. 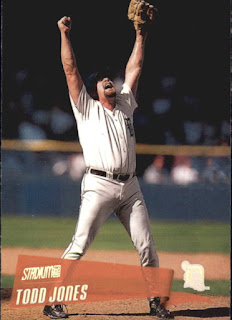 Once an All Star closer with the Tigers, and winner of the Rolaids Relief Man of the Year Award in 2000 when he tied (with Derek Lowe) for the league lead in saves with 42, Jones was seemingly past his prime when he joined the Red Sox.  In 2001, Jones started his downfall and saved just 13 games while splitting the season between the Tigers and Twins.  In 2002, he was with the Rockies but was ineffective.  This continued in 2003.  He pitched in 33 games with the Rockies, but had an 8.24 ERA before being released.  He was picked up by the Red Sox, and was marginally better in 26 games.  He was 2-1 with a 5.52 ERA and 31 strikeouts versus 13 walks in 29.1 innings.  Jones left as a free agent after the season but eventually worked his way back into being a top-flight closer, saving more than 35 games in three straight seasons with the Marlins and the Tigers, again, from 2005 through 2007.  His Red Sox stint was a blip on his comeback trail, but showed he still had something in the tank. 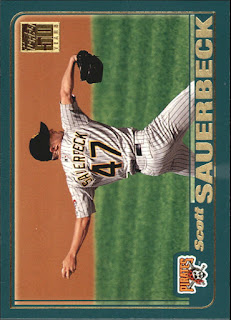 Yet another former Pirate to play for the Red Sox in 2003, Sauerbeck was a mid-season acquisition that was highly sought-after.  Sauerbeck had had a successful season in 2002 but was pitching with a 4.05 ERA when he was traded to Boston to shore up their left-handed pitching along with Mike Gonzalez for Brandon Lyon and Anastacio Martinez.  Unfortunately, Lyon had some issues with his shoulder and the Pirates complained.  Boston agreed to take Lyon and Martinez back, along with starter Jeff Suppan in exchange for returning Mike Gonzalez and sending top prospect Freddy Sanchez.  Both trades worked out poorly for Boston.  Sauerbeck made it into 26 games with Boston down the stretch with a 6.48 ERA.  He struck out 18 and walked 18 in 16.2 innings.  Sauerbeck was left off the postseason roster.  He pitched a couple more seasons with the Indians and Athletics after the season. 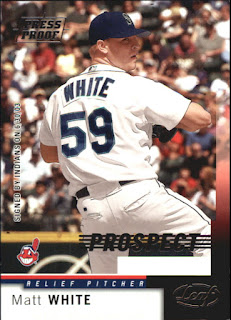 Matt White was a 15th round draft choice by the Cleveland Indians in the 1998 draft.  He did not make it to the Majors and was not on Cleveland's 40 man roster when he was selected by the Red Sox in the 2002 Rule 5 draft.  White was a southpaw pitcher and Boston took a chance on finding a diamond in the rough.  It did not work out.  White pitched in three games for Boston, giving up 11 earned runs in 3.2 innings, for a 27.00 ERA.  He walked three and did not pick up a single strikeout.  White was traded in June to the Mariners for Sheldon Fulse, who did not make the Majors, but who has a card with the Red Sox in the 2004 Bowman set.  White was not much better with the Mariners.  He appeared again in 2005 with the Nationals for a single game, which he lost.

There were some interesting names appearing on this list.  Several players had long careers in the Majors.  Several players had some success in the Majors.  Yet none of these players appeared on a card with the Red Sox.  Scott Sauerbeck and Todd Jones each played in 26 games with the Red Sox, though Sauerbeck pitched fewer innings on account of being a lefty specialist.  Todd Jones is likely my favorite player without a card in 2003, and he probably deserved one.
Posted by Metallattorney at 8:00 AM