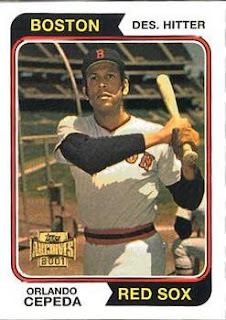 Cepeda was Boston's opening day designated hitter in 1973 and was preceded at the position only by New York's Ron Blomberg, Boston's opponent that day.  Cepeda would have to settle for winning the award given out at the end of the season for the best DH of the season, which is now known as the Edgar Martinez Award.  At the time, it was simply Designated Hitter of the Year.

Cepeda had a very good year in 1973, hitting .289/.350/.444 with 20 home runs and 86 RBIs.  It was the last productive season of his Major League career.  The 35-year-old had been slowing down offensively for a few years and was never really a very good defensive player in the first place.  Boston likely felt that he might be able to bounce back slightly if he could focus just on offense, and they would have been correct.

During Spring Training of 1974, Cepeda was released as Boston had a number of candidates to play DH, including Carl Yastrzemski, Bernie Carbo, and Cecil Cooper.  Cepeda was picked up by the Royals, but didn't play much and was ineffective.  Cepeda's last good season of his career was with the Red Sox.
Posted by Metallattorney at 8:00 AM