I have been able to make a handful of trades again recently, finally.  My wantlist is getting out of control lately.  None of these cards help out with that, but having new cards coming in is always welcome. 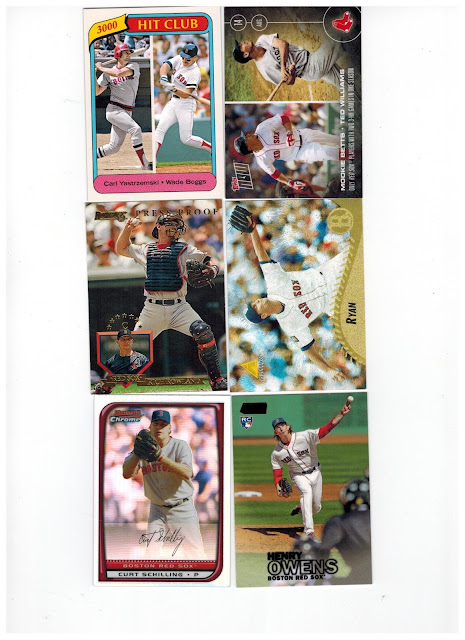 1.  2016 Topps Throwback 1979 Highlights: Carl Yastrzemski/Wade Boggs.  This card celebrates two longtime Red Sox in the 3,000 hit club.  Technically, only Yaz picked up his 3,000th hit with the Red Sox.  Wade Boggs was with the Devil Rays when he got his.

3.  1995 Donruss Press Proof Rich Rowland.  Rowland was a 30 year old rookie in 1994, though he had brief stints in the Majors in each of the previous four seasons.  He became Boston's backup after Dave Valle was traded to Milwaukee and hit nine home runs, though those were his only home runs in the Majors.

4.  1995 Pinnacle Museum Collection Ken Ryan.  Ryan also broke through in 1994, as a the team's closer after Jeff Russell was traded to Cleveland.  He picked up 13 saves and a 2.44 ERA, but promptly lost the job in 1995 when he struggled and was replaced by Rick Aguilera.

6.  2016 Stadium Club Black Henry Owens.  Owens has stalled a bit in his production, but he is still young and still has a chance to make an impact in the Majors.
Posted by Metallattorney at 5:36 PM