I finally managed to find an Archives blaster.  This year's Archives is highlighting the 1993, 1975 and 1958 sets.  1993 was one of my early favorites and 1975 has a ton of fans.  I am not sure about 1958 though.  The only card from this set I previously had was the Jonny Gomes Fan Favorites auto, so there is a lot of ground to cover.

Here are the Red Sox I pulled: 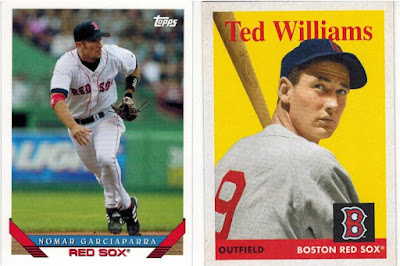 Well, not great, but not terrible either.  The Williams is notable because he actually was in the 1958 Topps set.  I kind of like this shot better, though it shows an obviously much younger Williams.  Nomar is fine, but nothing special here.  I would have liked the Bobby Doerr card personally.  And no 1975 pulls is disappointing.

Both of the Nationals cards were actually Expos, including a parallel from that insert set.  I would love to see the Expos return personally.

Boston surpasses the century mark finally.  They are now ten cards above the second-place team, but the Yankees and Braves are coming.
Posted by Metallattorney at 8:00 AM