I had to grab this card.  Sure it's a one-card mailday of a player who has not been very good this season, but it is a player that had zero previous Red Sox cards: 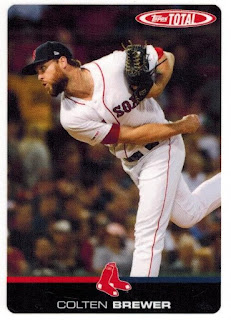 This is Colten Brewer, who was the only player Boston picked up in the offseason that has made any impact on the Major League roster at all.  Brewer was expected to be a major weapon in the bullpen.  It has not quite worked out that way as he has had some control issues, but he could still improve.  Oftentimes the best bullpen arms do not emerge right away and Brewer definitely has some impressive stuff.
Posted by Metallattorney at 8:00 AM