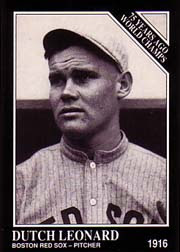 Quick trivia question.  Who holds the record for the best single-season ERA?  It is not Sandy Koufax or Bob Gibson or Cy Young or Walter Johnson.  It is Dutch Leonard who pitched to a 0.96 ERA in 1914 for the Red Sox.  Yes, you read that correctly.  0.96.  That is insane.

Leonard was part of an amazing pitching staff that included the likes of Babe Ruth, Carl Mays, Rube Foster, and Ernie Shore.  It was an incredible pitching staff and Leonard had some of the biggest success.

Leonard was part of the big Boston fire sale to the Yankees as he was sent to New York along with Duffy Lewis and Shore for a bunch of spare parts.  But Leonard never played for the Yankees, being sold to the Tigers a few months later after holding out.  Leonard finished his career with the Tigers but never had quite the success he did in Boston.
Posted by Metallattorney at 9:29 PM