A Quick Forum Trade and a Package from Zippy Zappy

I give blog trades their own post, but since the forum trade was kind of small, I did not think it would steal too much of the thunder. 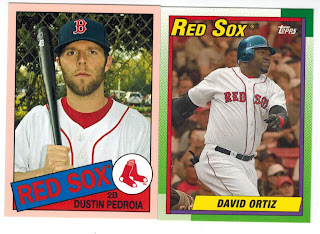 I did a forum trade in which I gave up a couple of Twins cards for these two Day Glo Archives parallels.

1.  2013 Topps Archives Day Glo Dustin Pedroia.  I have no idea why my scanner makes these look pink.

2.  2013 Topps Archives Day Glo David Ortiz.  You can barely tell these are the Day Glo parallels at all, even without the bad scan.

And next is the big package that I got from Kenny, aka Zippy Zappy.  Originally only supposed to include six cards, he saw fit to dump a bunch of his Red Sox stuff on me, something I greatly appreciate, particularly since there were so many I needed. 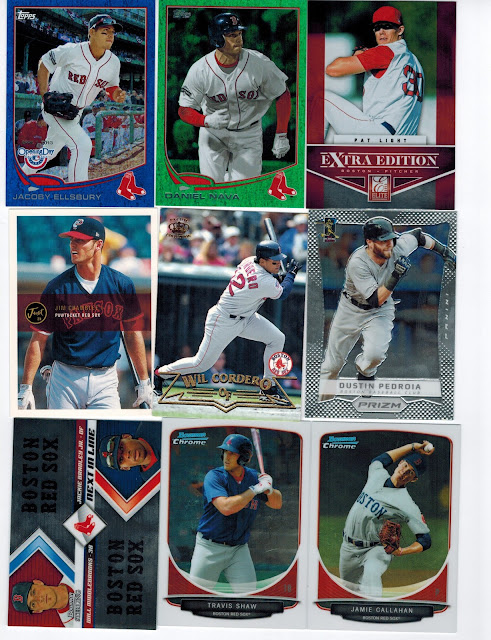 3.  2013 Topps Opening Day Blue Sparkle Jacoby Ellsbury.  I love these parallels.  I think I like them even more than the Emerald parallels.  Speaking of...

4.  2013 Topps Emerald Daniel Nava.  What a season Nava is having.  He is making a case for inclusion on the All Star team.

5.  2012 Elite Extra Edition Pat Light.  Hopefully Light will step things up a little bit and be one of the bright spots from the 2012 Draft that has thus far been fairly disappointing.

6.  2000 Just 2K Jim Chamblee.  I remember Chamblee.  He was a big prospect for a little while with a lot of power for second base.  He eventually moved off of the position and his power was not nearly as impressive.  He did make the Majors for all of two at-bats for the Reds and struck out both times.

7.  1998 Pacific Wil Cordero.  Fresh off of his domestic assault charge.  Cordero had a decent 1997 season, hitting 18 home runs, but that did not look all that great because he hit them as a left fielder instead of a middle infielder.

9.  2012 Bowman Sterling Next in Line Will Middlebrooks/Jackie Bradley Jr.  A nice-looking card of two young, up-and-coming players.  Middlebrooks has been sent back to Pawtucket but should be back soon.  Bradley could be in line for a starting role next season. 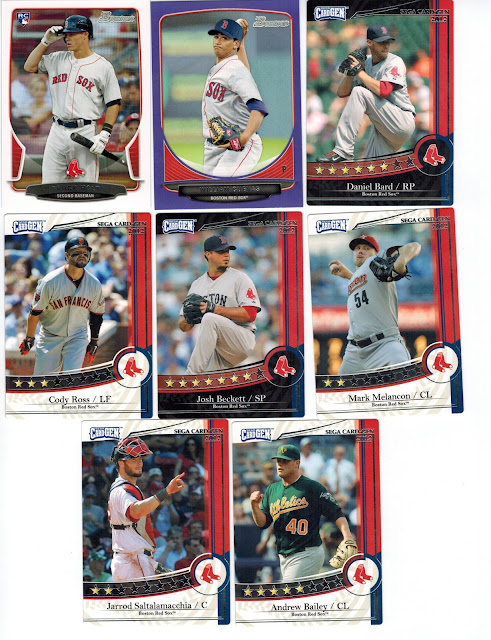 12.  2013 Bowman Brock Holt.  Holt won the IL batting title last year and probably would have been called up this week when Boston was looking for infield reinforcements, but he has been injured lately.

14.  2012 Sega Card Gen Daniel Bard.  These cards are the original cards that were to be included in the trade.  I have never seen these before.  They appear to be from an MLB Showdown-like game.  The backs are written in Japanese and Kenny saw fit to include a handwritten translation.  I really appreciate that.

17.  2012 Sega Card Gen Mark Melancon.  Melancon was a part of not one, but two bad Red Sox trades. First, there was the one where he was acquired.  He struggled for Boston while Jed Lowrie had a breakout season.  Then they traded him away and he has flourished in Pittsburgh while Joel Hanrahan struggled and promptly had Tommy John surgery.

Thanks Kenny!  I owe you some more Yankees.
Posted by Metallattorney at 9:01 PM