In this series, I look at my first team set: 1991 Topps. This was the set I started my baseball card collection with. 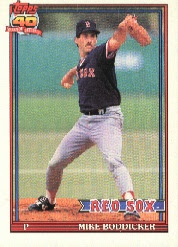 I was kind of annoyed the other day.  I was browsing through stuff about the Red Sox and came across an article about the worst in-season trades the team ever made.  I can not even find the article anymore and it was written quite a while ago.  He listed the trade that the Red Sox made giving up Brady Anderson and Curt Schilling for Mike Boddicker pretty high on his list.  Now while it is true that Boston gave up two eventual All Stars in the deal for Boddicker, the writer dismissed Boddicker's contributions to the Red Sox entirely and basically said he was awful for two-plus years.  That is certainly not true.

Mike Boddicker was picked up during the 1988 season to be another veteran arm on the staff and he produced.  He was a former Cy Young contender, winning 20 games for the Orioles in 1984, leading the league in wins and ERA.  Boddicker went 7-3 with a 2.63 ERA in helping Boston reach the ALCS in 1988. In 1989 he went 15-11 as the number two starter, then in 1990 he went 17-8 with a 3.36 ERA.  Those are solid numbers.  Boddicker was a very effective number two starter to Roger Clemens for more than two years.  He also won the Gold Glove in 1990 for the Red Sox, making him the only Red Sox pitcher to win the award to date.  He then signed a free agent contract with the Royals after the season where he declined significantly.

Yes, Brady Anderson was a long-time good player for the Orioles, making three All Star teams, with his first occurring in 1992.  And yes Curt Schilling seems like a decent candidate for the Hall of Fame, although he did not even begin pitching well until a couple of teams later.  But Boddicker was certainly a solid pickup and really helped the team in his time there.  This is one of the best examples of a trading deadline deal.  Boston got significantly better in the short-term and Baltimore picked up two solid future players.
Posted by Metallattorney at 11:27 PM