This is likely my last A&G blaster.  They have now disappeared from shelves completely.  I only pulled one card, but it is one I am excited about: 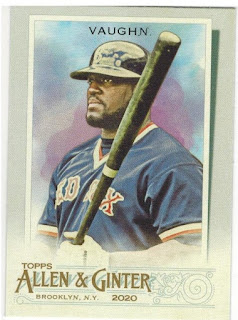 The scan here is terrible.  I am so happy to see Mo Vaughn starting to appear in some sets again.  Vaughn was one of my absolute favorite players growing up.  He made his Major League debut in 1991, the year I started watching baseball.  He was the team's biggest star from 1993 until Nomar Garciaparra emerged in 1997.  His was the first jersey I ever had.  I was heartbroken when he left the team as a free agent, more than almost any other player.  I felt like I grew up watching Vaughn.  This is a short-printed card from the set, so I am definitely okay with this being the only Red Sox card I pulled.  Vaughn also has a card in the Longball Lore insert set.  I am hoping for a Fan Favorites autograph in next year's Archives.
Posted by Metallattorney at 8:00 AM