Trade With a Dodgers Fan

I have not been posting lately.  I apologize.  Things have been busy at work.  Working on a trial right now and going to be arguing in front of the state Court of Appeals in less than two weeks.  I have not been buying a lot of cards lately either and even fewer trades.  It has been a bit frustrating.  So that is why it came as such a nice surprise when Jason contacted me to set up a trade.  Jason is a Dodgers fan and is getting back into collecting after several years' absence.  As such it was fairly easy to hook him up with some Dodgers cards and he had a few of my 2019 Red Sox wantlist needs.

Here is what he sent: 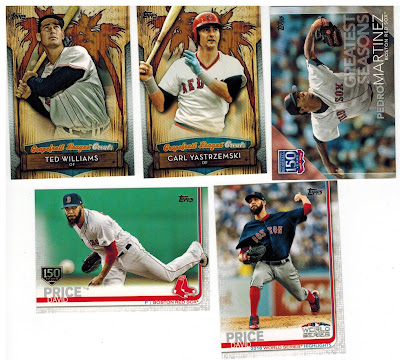 Here we have a nice assortment of stuff, including a few inserts.  I love the 150 Years inserts.  This one celebrates Pedro Martinez's 2000 season.  It is nice to be able to say that I got to experience that season unfolding.  He truly was a marvel.  I like the 150 Years stamped cards too.  David Price is a player that I intend to pick up more cards of this year.  I was blown away by his postseason performance.  I hope he keeps it up. 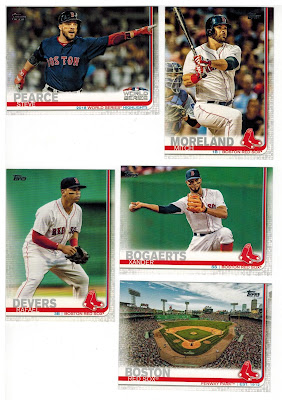 And here is the rest of the stuff.  These are several base cards that I needed to complete my base team set.  I still have a few more out there to get, but Jason certainly helped where buying packs was simply not working out for me any more.  We have another nice World Series highlight card from new fan favorite Steve Pearce as well as base cards from Bogaerts, Moreland and Devers.

Thanks a ton for the trade, Jason!  Hope to deal with you again.
Posted by Metallattorney at 9:54 PM