I was bored the other day and was itching to open up some packs.  I am still looking for Donruss.  For some reason the Walmart near me does not seem to be getting it in.  That's unfortunate.  If anyone has any versions of the Brock Holt Highlights card, I really want that one.

Well onto the breaks.  First up was two jumbo packs of Opening Day.  Those resulted in three Red Sox cards, including two parallels:

Now, I am not a big collector of the mascot cards or ballpark cards.  I keep them in my collection when I get them, but I do not go out of my way to get them.  Porcello was the only base card I received.  I really like this Pedro Martinez insert showing him hoisting the 2004 World Championship trophy.

Up next was a hanger pack of Heritage:

Once again, three (actually four but one was a double) Red Sox cards.  It included this cool insert of Yaz and Mookie Betts.  It also included a World Series Highlight card of Steve Pearce and a League Leaders card with J.D. Martinez on it.

The highlight of the day though was this: 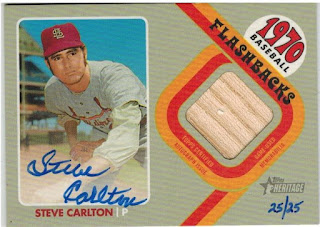 I have been pretty lucky with packs this year.  This is the third auto or relic I have pulled and I really have not been buying much.  And they have all been pretty good too.  An Albert Pujols relic, the Bud Selig rare auto that I recently traded, and now this.  Once again, I am holding out for something decent for my Red Sox collection, but it is available.

The Red Sox came out on top for the second time in a row.  That is nice to see after having so many struggles with Topps Series 1.

SAN DIEGO PADRES: 7
With two straight strong showings, the Red Sox have vaulted their way into third place.  The Braves are just insane this year.  The Padres will likely make up ground once Manny Machado cards find their way into packs.  I always seem to pull a bunch of cards of him.
Posted by Metallattorney at 8:00 AM